This coin features an optimistic, youngish Marichal, only three seasons into his dominant Hall-of-Fame career. 1963 proved Juan's first outstanding season, with a league leading 25 victories and 2.41 ERA. (He did make an amazing 40 starts and finished another game for 41 total appearances and 321 innings. Yow.) This performance garnered a few MVP votes, but wait...no Cy Young support? Blame it on bad timing, as our friend Sandy Koufax won the award unanimously and netted an MVP by going 25-5 with a 1.88 ERA in LA. (Juan's famous high-kick went on win at least 25 games twice more during the 60s and more than any other pitcher in the decade overall.) 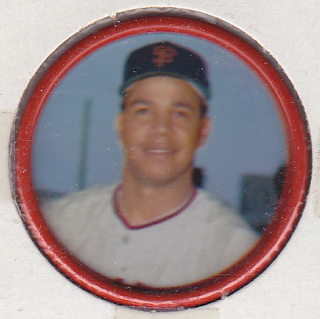 This issue does a nice job considering the small size provided by a dollar-sized coin. Its clean layout includes a full-color photo, some player text on the reverse, and a raised edge to protect the front from scratches and other shenanigans. Most oddball releases fall significantly below the bar in release quality or content, but the Salada / Junket amalgam turned out a nice product that rivals Topps own coins from the 60s and 70s. 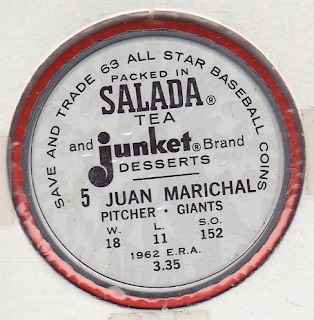 The 63 different coins in their 1963 "All-Star" set comprise most top players of the day, Hank Aaron to Maury Wills (who still hadn't appeared in a Topps set). Only one complaint, really--could we get more action shots? I know head shots take up less space, but it's always excellent to highlight players with such an individual style like Marichal's. It gets you that much closer to the game and shouldn't be overlooked, even today.
Posted by Spike Glidden