Sweet mercy, is that the mono-est monobrow that ever lived a life in California? Witness the calling card of Wallace Wade Moon, 1954 ROY for the Cardinals and later a fine outfielder for the LA Dodgers. A smart and more-than-capable hitter, even as a rookie he prompted St. Louis to ship future HOFer Enos Slaughter off to the Yankees to make room in the outfield. 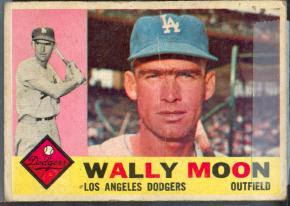 Wally shares my birth date, if a couple of generations removed. We join Marlon Brando and Doris Day as coming from the traditional 93rd day of the year, though I'm only someone who wants to live in CA, compared to an actual former Dodger and some Hollywood types. (Sure, Brando and Day got the big bucks, but Mr. Moon garnered plenty of LA fans. What he lacked in screen presence, he made up for in bat speed and arm strength.)

Some people really enjoy the 1960 Topps set's horizontal layout. It recalls the classic 1956 sideways design and again features dual pictures. Its colors, though--hmm. The alternating, blocky typeface weighs down the front like an anchor made of cast-iron mediocrity. I think enlarging the player photo and minimizing the text would really improve things. After all, the 50s card really showed off players by capitalizing on the larger stock size and integrated portrait + action shot. Everything flowed together. In this case, unfortunately, the black-and-white photo, color photo, and overdone label work against each other.

The remainder of their 1960s sets went back to "vertical," so I assume sales didn't support this change in design. Classic elements like 1962's wood grain and 1965's pennants made for more memorable sets, though you'd see the occasional horizontal card again in 1973 and 1974.
Posted by Spike Glidden