Not long ago, another card blogger described Ron Robinson of the 80s Reds hilariously as "pret-a-porter clown," given his sunny demeanor and frizzy hair. Unfortunately, not everyone in makeup and floppy shoes is happy. Everything that Mr. Robinson captured in color and outlook, Gary Wilson twists through a mirror darkly. His face hides in shadow, a camera obscura of the baseball diamond. Bright orange, red, and yellow pants aggravate and disturb all who witness the pitcher's labored delivery. Finally the pitch arrives--and grips its receiver with feelings of loss and acute paranoia. Sometimes you catch the ball. Other times, it catches you. 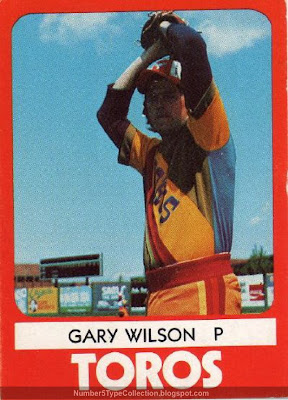 OK, I get that the uniforms reflect the garish attire of bullfight toreadors and Tucson is close to the Mexican border. Still, Wikipedia sums up the feeling of anyone with eyes to see.

"In 1980...following the lead of the [Astros]...the Toros introduced what some consider the ugliest uniform in the history of organized baseball: orange pants with yellow and red stripes, and a jersey with a turquoise back, yellow raglan sleeves, and a front resplendent in yellow, avocado, red, orange, and lime green stripes of various widths."

TCMA issued a clutch of minor league sets in 1980 and most share this design of large, red borders with blocky team names. Yet again, the guileless photographer took his photos at noontime, drowning Gary's face in shadow. Some contemporaries show better composition, but most serve a simple purpose: get the players onto cards and into the hands of fans.

Wilson's major career consisted of six games as a 1979 Astro, yielding 15 hits, 6 walks, and 10 earned runs in 7 1/3 innings. People probably enjoyed his play better at the AAA level; at Tucson in 1980, he won 12 games with a team-low 3.47 ERA. Gary's teammates included many future MLBers like Jim Pankovits, Danny Heep, and others with names more interesting than their ultimate performance. At least, they might've thought, I'm out of that Toros getup and into a more sensible Astros uniform.
Posted by Spike Glidden