This last card of the great Whitey's career includes a curious pitching pose. With his upper body released forward and legs oddly at rest, I see "mislaid G. I. Joe figure" instead of "Hall-of-Fame pitcher with highest career winning percentage." Most of Ford's cards treat him with a little more gravitas, or at least good humor. This shot looks like a photographer saving time between spring training workouts. 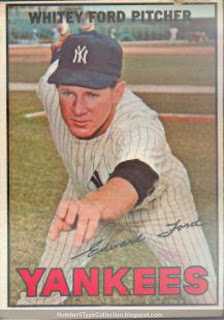 Other than its twin 1967 O-Pee-Chee card, this is the only time Whitey Ford shows up on a #5. Some other memorable cards bear his image, though. Two generations before Griffey, Jr.'s RC started Upper Deck's seminal 1989 set, 1951 Bowman led off with Whitey's first card. Despite pitching in only 20 games, a 9-1 record in 112 innings with 59 Ks and amazing 153 ERA+ placed him second in the 1950 Rookie of the Year balloting behind Walt Dropo. His smiling mug missed the next two seasons serving in Korea, but returned in 1953 for another great Bowman card photo. He doesn't really take a bad photo, even if the 1967 card caught him apparently off-balance.

First-year performances like Ford's happen every now and then. Just two years ago, Anibal Sanchez of the Marlins picked up a few RoY votes after a remarkably similar 10-3 season in 114 innings with 72 Ks and 152 ERA+. (He also no-hit the Diamondbacks on September 6th.) Unfortunately, most of his next two seasons vanished--poof!--due to shoulder problems and he only returned to the mound on July 31st of this year. Young pitchers prove as mercurial as ever to develop, no matter how much baseball owners hope, pray, and pay for them.

This scan is not of the card in my #5 collection. (It's probably from Google Image Search.) I know because mine features a handwritten note on the front. It says, in red pen, "non major leaguer." Truly, Ford retired in the middle of 1967, so maybe a young collector wanted to avoid confusion. ("Don't root for this guy! He doesn't play anymore!") Whatever purpose it served then, I know that in today's terms, the power of low-grade collecting gained me a legend for $1.50 + postage.
Posted by Spike Glidden