TCMA published a ton of oddball sets during the 1970s and 1980s. Most of them used vintage black-and-white photos to construct "theme" sets like what you see here. I assume that as collectors, T.C. and M.A. owned a wide array of player pictures and this proved a satisfying way to make them available to the hobby. 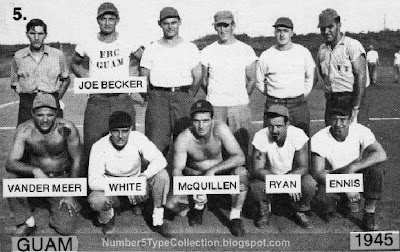 The 1975 Guam set steps beyond the role of typical "card" to tell the story of a few dozen players who toured the Pacific Theatre during WWII. Card fronts show them socializing, playing, or posing for photos. White labels ID the visitors, with enlisted men and military brass making up the rest. #5 includes several current and former MLBers.

Joe Becker: Played two years (and only 40 games) for the Cleveland Indians. Of his 20 career hits, 8 went for extra bases.

Johnny "The Dutch Master" Vander Meer: Pitched thirteen seasons, most of them for the Reds. Only MLBer to throw back-to-back no-hitters.

Red McQuillen: Played four seasons in the outfield for the Browns. Placed in the top 5 for both triples (12) and double plays (21) in 1942. So was he slow to first, but superfast rounding second?

Connie Ryan: Played 12 seasons, mostly as a left-side infielder for the Braves. Led the majors in games played in 1952, but saw only a single game--his last--in 1954. 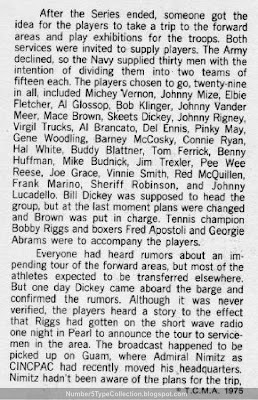 The set comprises an entire essay broken up piece-by-piece, so the back text doesn't usually relate to the front. It's certainly an atypical way to approach American history!
Posted by Spike Glidden