Today's owner of an excellent sporting name, "Rip" Repulski, also knew how to ride baseball's trade winds. Six years into his career, Rip swapped from last-place Philly to the 1959 Dodgers, just in time for their first left coast championship. Only a season later, he moved to the Red Sox and hit a grand slam in his first AL at-bat. While no Bronx Bomber, his respectable career stats include 100+ homers and an All-Star appearance in 1956. 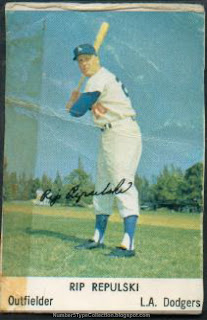 50 years in Brooklyn rendered but one World Series title in 1955. A scant two years after moving to LA, however, the emerging arms of Koufax and Drysdale quickly powered the Dodgers to another. While former "bums" like Snider and Hodges eventually returned to their New York roots, the team thrived on the West Coast's hunger for big-league sports. Seeing no need to turn away paying customers, all three local games in the '59 series drew over 90,000 fans, topping out at a baseball record 92,706 for game 5.

Local potato chipper Bell Brand capitalized on the team's move to brilliant California sunshine and green, green grass with several team sets. 1958's initial issue numbered only 10 cards, frustratingly hard to complete because of big names and single-prints. 1960 doubled down with 20 cards and covered most of the championship team, though surprisingly omits the aforementioned Drysdale. Originally wrapped in plastic and issued one-per-bag, you don't find many cards without oil residue or marks on the market. If you do, be prepared to pay more than a handful of chips for them. My own Repulski features a tape stain, numerous creases, and trimming on at least two sides. (Tipton mint, as they say.) Pretty sure I scored this jewel--and maybe even a cow--for no more than a handful of magic beans.
Posted by Spike Glidden