In 1951, future Hall of Famer Montford Merrill Irvin teamed up with Hank Thompson and Willie Mays to form the major's first all-black outfield. A WWII veteran and standout player in both the Negro and Mexican leagues, Monte didn't serve in Mays' shadow, like so many other outfielders could have. He led the NL with 121 RBIs and proved key in the Giants overtaking my dad's beloved Brooklyn Dodgers for the pennant. (Following Thomson's famous homer, they lost to the Yankees in six games, though Irvin brought his A game and batted .458 in the series.) 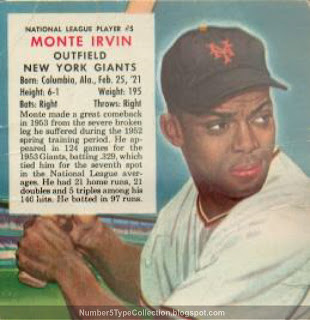 Most pictures of Monte show him smiling or even goofing around. I like this card's use of focus, with eyes on the ball and hands held high. The same attention served him well off the diamond, with a post-playing career as a scout and league administrator under Bowie Kuhn that stretched into the 1980s. Elected to the HOF primarily for his Negro League performance, it's not surprising that he continues to campaign for players from that era as a member of the Veterans Committee.

New cards continue to feature Mr. Irvin, most artistically the Allen and Ginter sets. The classic color-tinted style of Red Mans is great to look at, though, and it only helps that they came on stock even larger than contemporary Topps designs. If you like the look but not the prices, try for the modern reprint sets, as they used the same size and sacrifice little (if any) of the original appearance.
Posted by Spike Glidden