I spent last weekend in Cleveland's I-X Center, criss-crossing its vast expanse of concrete and carpet in search of collectibles from ages past at "The National" (Sports Collectors Convention).

This annual show attracts serious enthusiast and casual fan alike. Thousands of attendees come to buy all kinds of ephemera, but most of my time was spent looking for things before the 1950s, an easier task given that this was America's biggest annual gathering of sports dealers. 72 hours of walking, talking, and searching yielded many treasures, and here are on-site pictures of my five favorites. 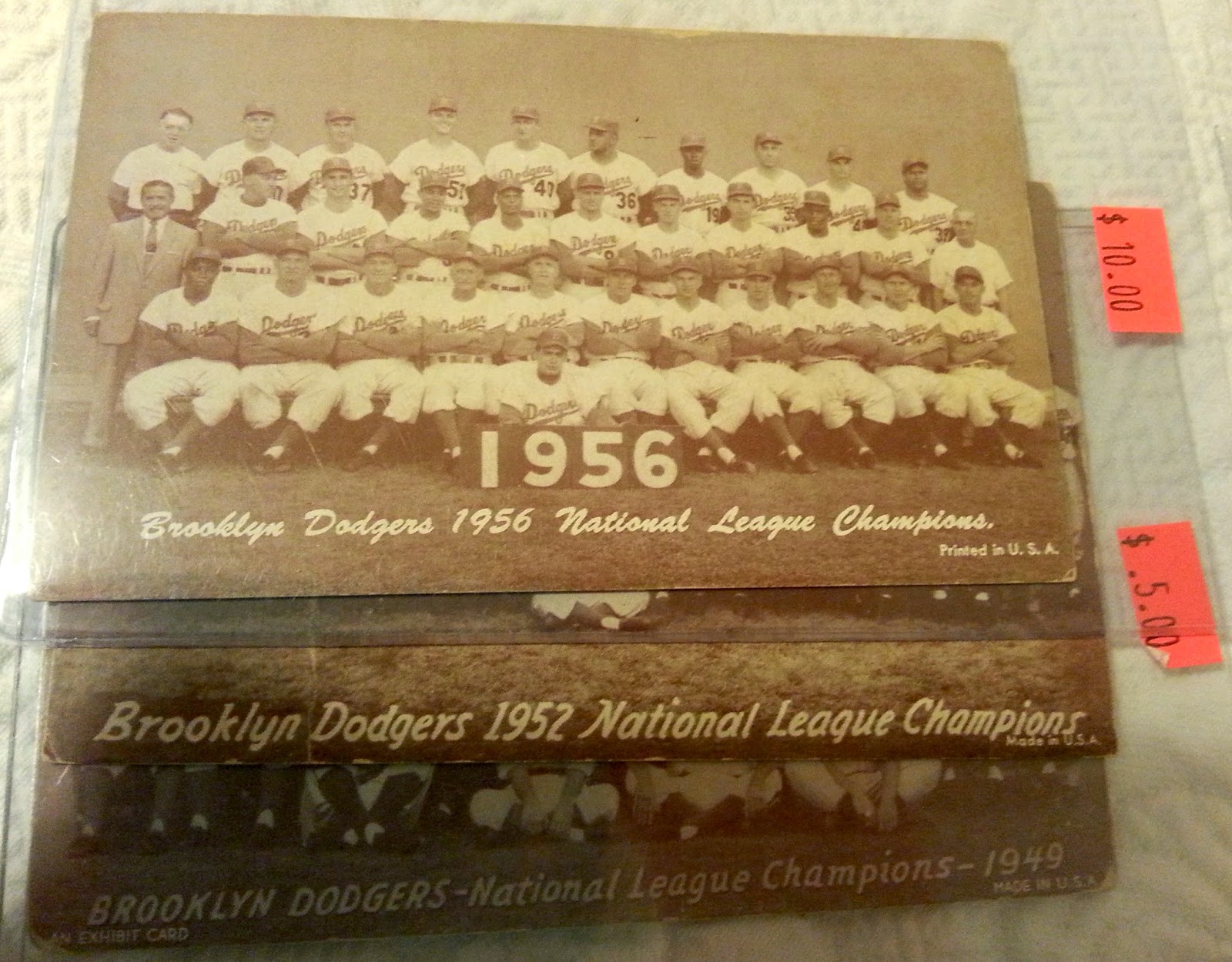 Prior to leaving for LA, the Dodgers regularly finished as also-rans to the crosstown New York Yankees, bringing home just one championship in 1955. These machine-vended postcards show three of the squads that fell short in the Series (1949, 1952, 1956) and came relatively cheap considering Brooklyn's popularity with modern collectors. My dad first started following baseball as a Brooklyn fan, so I plan to write notes on each back and send them along as actual postcards.

If you enjoy unusual phases of baseball history, check out The Brooklyn Dodgers in Jersey City, a story of Brooklyn's two seasons of New Jersey "home" games, all played prior to moving west. It tells a story familiar to small-market teams, as Walter O'Malley balanced offers from several suitors while searching for a more popular, enduring home for his Dodgers. 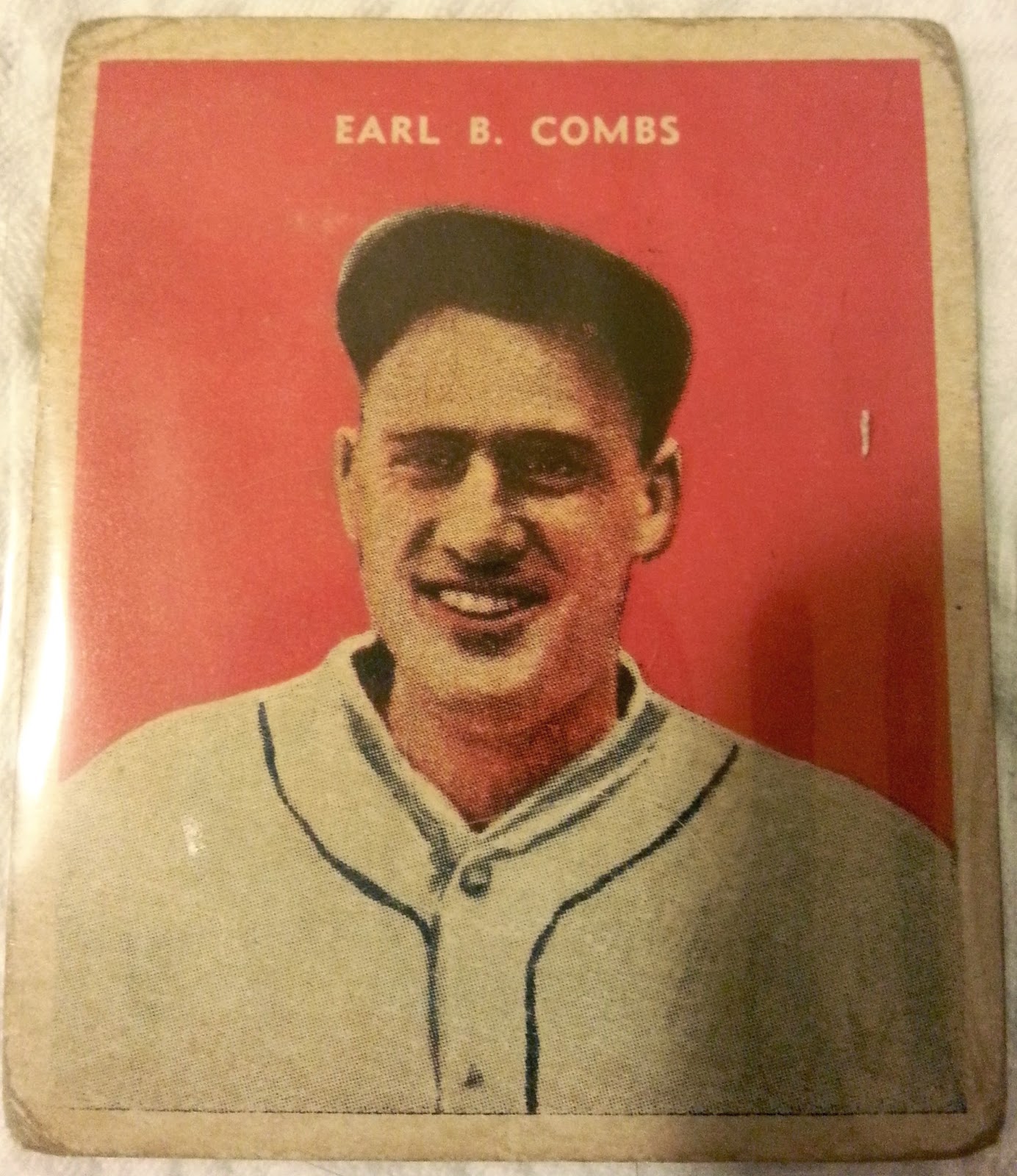 Candy makers first packaged cards with chewing gum in the early 1930s, a practice that kicked off what we call "bubblegum cards" today. This set, on the other hand, was one of the last from the previous generation, which came with slabs of caramel instead of gum.

Unfortunately, sticky sweets were more challenging than gum to protect from the cardboard, so kids often found their baseball players fouled with a brown crust of sugar when the wax packaging didn't do its job. All that damage meant fewer such cards survive today, so this rarity for my type collection cost a higher-than-average $200. (Its type card profile talks more about the gum/caramel situation.) 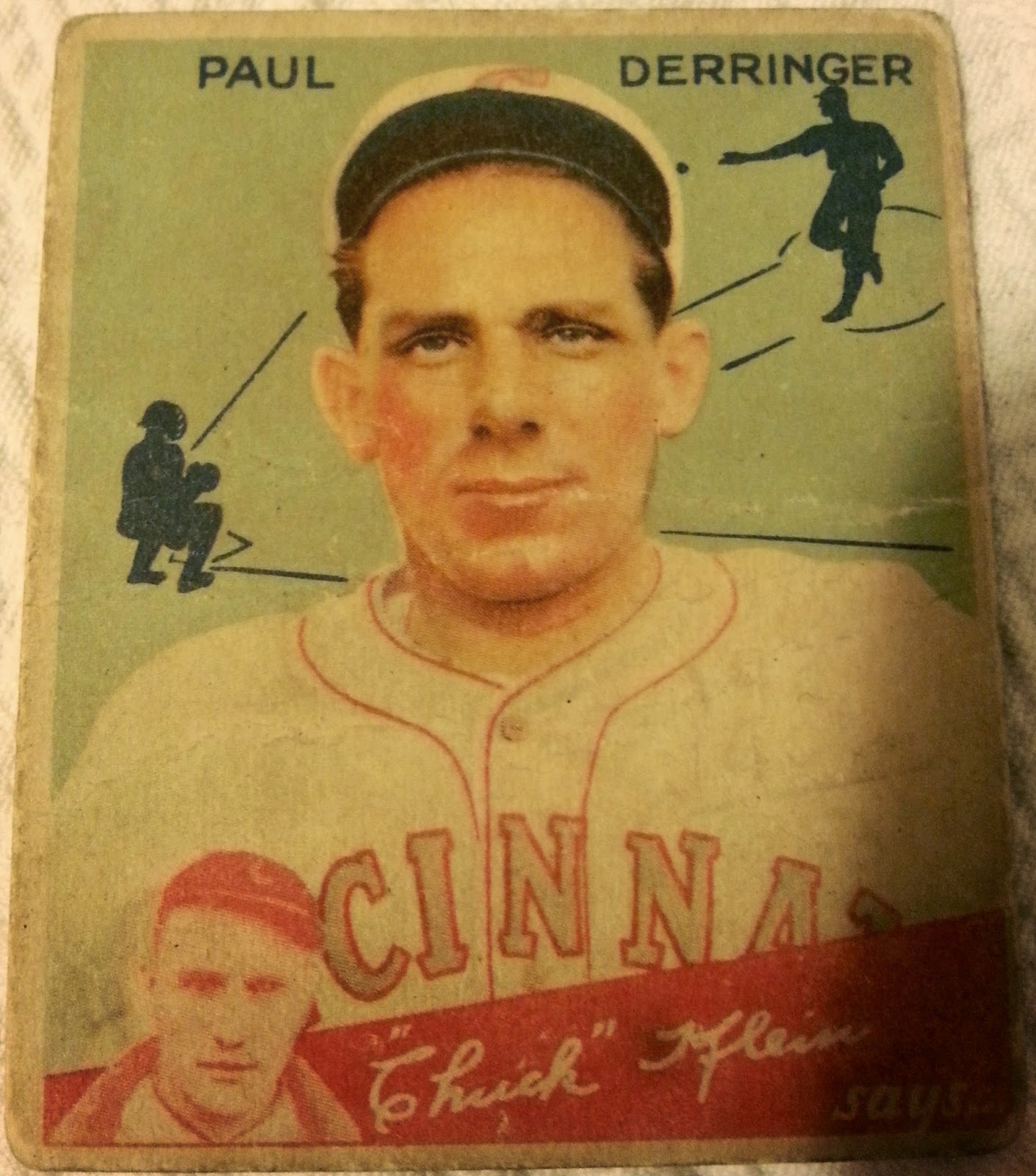 The back of Mr. Derringer's card charitably notes that his 7-25 record in 1933 included a "fair bit of bad luck," which might've been better stated as "lousy teammates," a last-place Reds team that won barely 1/3 of its games.

Six years later but still in the same uniform, Paul reversed his fortune with a 25-7 record for the pennant-winning 1939 squad (career stats). Not many pitchers can claim such a turnaround! #84 was also my next-to-last card for this set; all that remains is #37 Lou Gehrig. 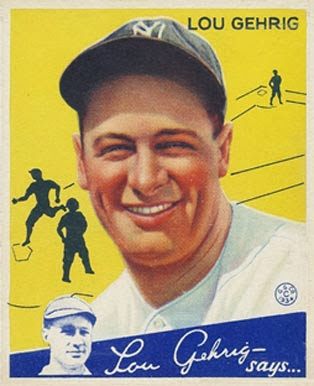 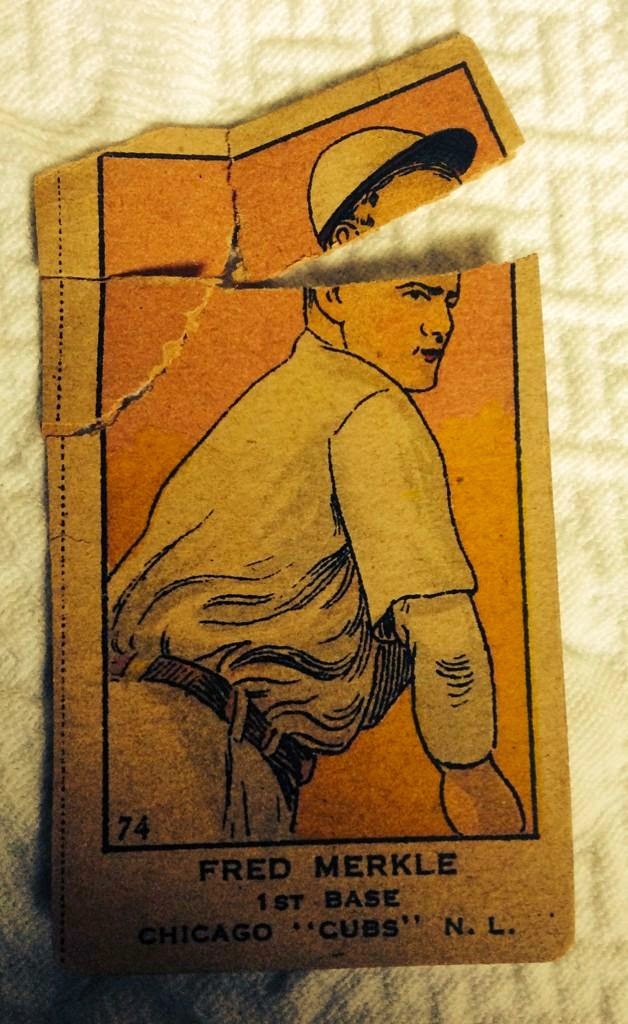 As I joked to collecting friends, this 1919 Merkle card (of Merkle's Boner fame) has a removable head to allow both a) new hats and b) checking for brains. At a paltry $3, it was an affordable and entertaining purchase. 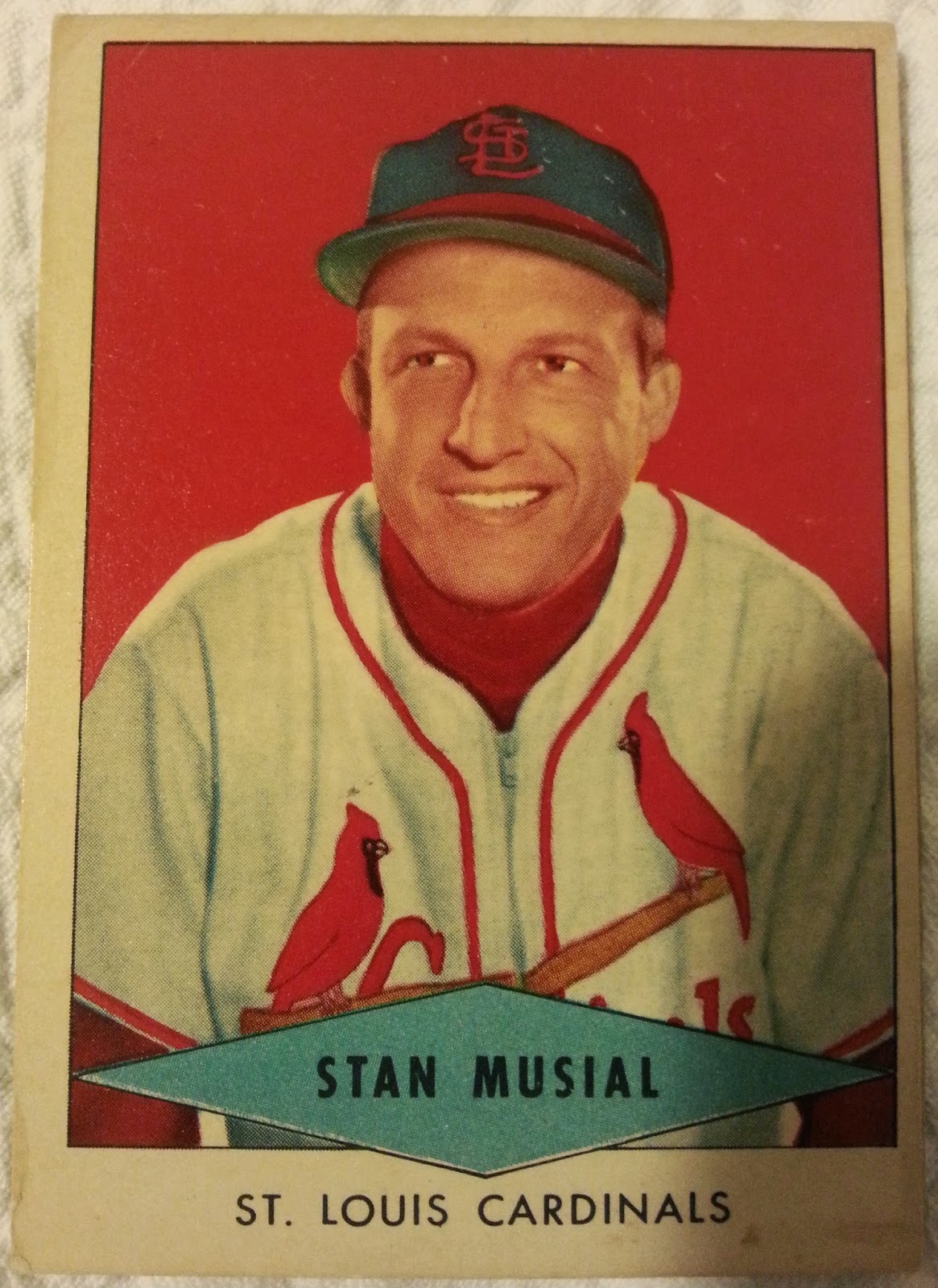 Already one of the game's finest players, St. Louis fan favorite Stan Musial went "missing" for most collectors in the mid-1950s. He appeared in one 1953 baseball set (Bowman Color) and then disappeared from gum cards for several years before reappearing on a 1958 Topps All-Star card.

In-between those "major" sets, Musial appeared on this limited-run dog food set, one of very few card makers who met his steep contractual asking price. Their 33-player checklist features rich color and attractive portraits, making it a fun set to build, 60 years after Red Heart first offered them by mail.

Stan Musial and Mickey Mantle are the Red Heart set's priciest cards, given the stature of both players. I paid $90 for this one thanks to minor back damage, but it sure looks nice from the front.

Last But Not Least

Lest it sound like Cleveland was all about conspicuous consumption, no trip to The National would be fun without meeting up with over 20 of my trading friends at OBC. We did everything from swap stories to cook BBQ to flip cards on tables, within acres of dealers that we infiltrated like ants at a picnic.

If you know collectors who keep in touch virtually, I highly recommend meeting face-to-face when possible; the more people you have, the more manageable (and enjoyable) an event like this becomes.
Posted by Matthew Glidden

$3 is a steal on the Merkle. And I will say nothing great about the Musial, because the site of it alone speaks for itself.

Yeah, had to look twice to believe it was really Merkle! Anyone selling Tinker/Evers/Chance for $9?

I have to make it to the National someday.. Love the Musial. Do you go to the show at the Shriners in Wilmington.

Glad you made the show and enjoyed....I sure did. All day Thursday and Friday, and 3 hours prior to my flight home on Saturday and still didn't see every table! Nice facility too, I'd go back there anytime.

Mark, I try to make Wilmington each time, you?

And agreed, Clelveland is one of my favorite National sites. Next time maybe I'll finally ride the ferris wheel! :-)

I make at least one of the days. Usually the Sunday. Maybe at some point we will meet up.

Mark, I'd be happy to! Let's shoot to meet up in November.

Sounds good. Do you ever hit the Mansfield show

When I lived in Easton, not since moving to Cambridge. How's that show these days?

I live in Norton so it's a 5 minute ride. It's not a bad show. Usually once a month. Pretty good mix between vintage and new stuff.

Those are some mighty nice finds. I love the Merkle. How could anyone pass on a great card like that?

After following your link, I'm pretty interested in this OBC group. I read through the FAQ and am going through the history, think you could help me along? Drop me an email if you don't mind.