After Mickey Mantle and Roger Maris's spell-binding race to break Ruth's single-season HR record in 1961, Post Cereal went all-out promoting the Yankee teammates in their 1962 set. They published another set of on-box cereal cards, pushed those cards via print, radio, and TV spots, and even added a French-translated version for Canadian baseball fans.

Today's entry highlights the advertising that coincided with 1962's Opening Day, when Maris & Mantle appeared on 2-card inserts in LIFE magazine. Although originally part of a larger ad, most collectors trimmed Mickey down to the size that's part of my type collection.


At first glance, this Mantle looks similar to his 1962 Post Cereal box card, but lacks the blue grid lines around his stats. Close inspection also shows his photo's re-cropped along the bottom-left edges.


Also compare my trimmed version to this full-bordered LIFE promo, which linked Mantle and Maris on side-to-side perforations. The scan's from an Aug 2014 Mantle/Maris auction that closed for $40.

While it could be from either insert, my LIFE type card's probably trimmed from the unperforated mail-in subscription panel below. (Mantle's on one side and Maris is on the other, so this scan shows both sides of the same panel.) 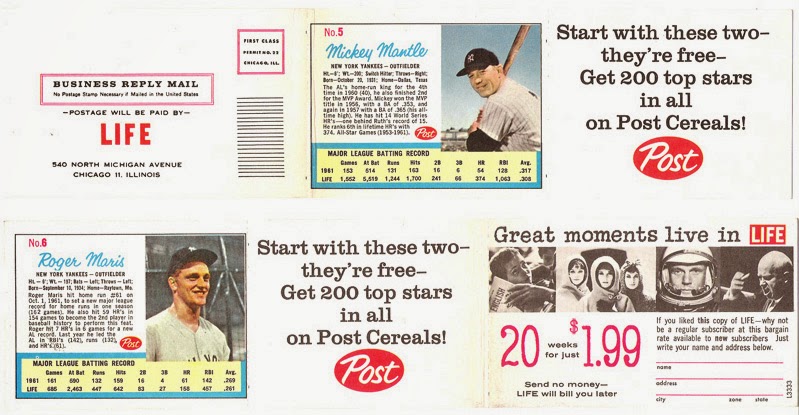 CenturyOldCards.com "misc" listings includes a complete April 13, 1962 LIFE magazine with this insert positioned opposite a full-page Post ad starring Whitey Ford. Mantle's facing toward the reader, with the back of Maris's card to his right. 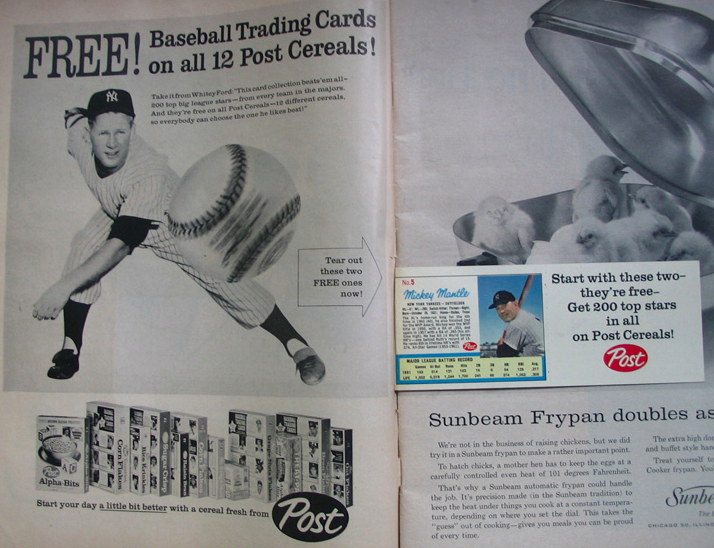 All LIFE panels used thin, papery stock, and advertise Post Cereal on the backs. (Post's on-box cards came on sturdier cardboard and held up better over the years, in my experience.)

Post gave Mantle himself a spoken line in this 60-second spot targeting (surprise!) both boys and girls as collectors.


Today's LIFE type card profile completes a quartet of very similar 1962 issues featuring Mantle as #5. Note that Post's Canadian set includes French on every card and must've taken a lot of extra work. (All that effort might've proved unprofitable, as Post chose not to make a French version for 1963.)

UPDATE: Thanks to this Net54 thread on 1962 Post, I learned LIFE magazine inserts vary slightly from US to Canada. While both cards are the same, its addressing changed to fit the Canadian mold. 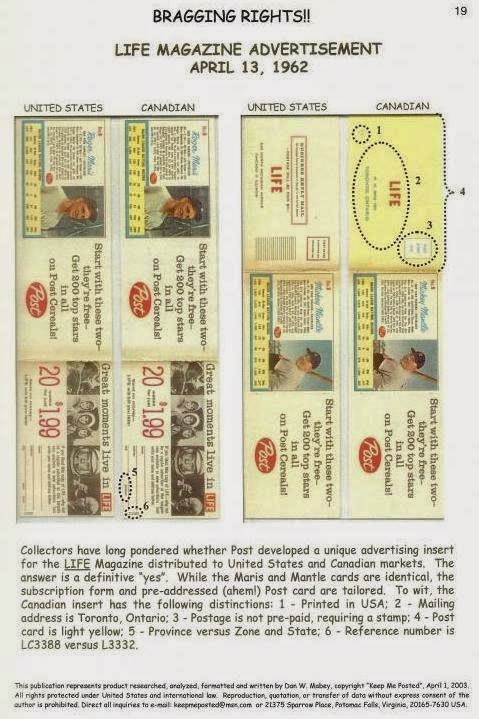 Value: Due to tight trimming and a torn corner, my #5 Mantle cost only $5 plus postage on eBay. Expect to pay more for well-trimmed singles, a full Mantle-and-Maris page, or complete magazines with the insert.

Fakes / Reprints: I haven't heard of any LIFE counterfeits, probably because they're valued far below his regular Topps cards. This two-sided printing would take more "work" than faking a Post cereal card and probably isn't worth the time, unless you copied the full-page ad sheet.