Back from an off-season European vacation to Lisbon and boy are my Portugals tired. 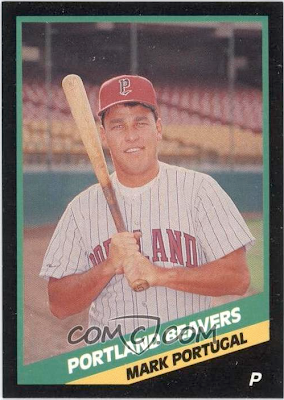 October's a good time to visit Portugal, if you accept the occasional all-day rain squall that turns pitched cobblestone streets into bowling lanes of tourists in their mid-60s, rolling and sliding from one side to the other. Most locals walk in their streets when possible, because the softer grooves worn by cars provide better footing than the slick black-and-white stones used ubiquitously for sidewalks. Those sidewalks include lots of old patterns and mosaics, which look cool--just ask Wikipedia--but also sprain ankles in wet season. 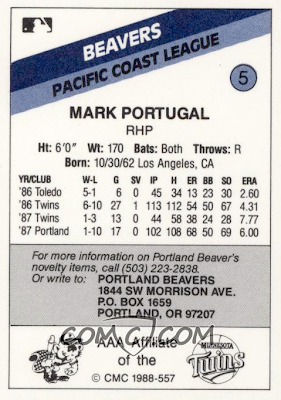 Interesting that Mark Portugal appears as a switch-hitter on this Portland card. He changed to rightie-only in the majors and swung a good enough stick in 1994 to capture the Silver Slugger for pitchers. (That's an NL award, since the AL gives its Silver Slugger to DHs.)

(If you retire to Portugal, make sure to visit Porto and spend an afternoon touring the port wineries. In the words of eBay, A+++ WOULD TASTE FROM AGAIN.)

Fakes / reprints: Mark Portugal had a nice long career in the majors, but it's hard to imagine anyone profiting by faking his minor league cards.
Posted by Matthew Glidden