I like to think any #5 is welcome in the type collection, but have to stretch the definition of "card" for today's set, as its Super-8mm film cartridges and 3/4" boxes would never fit between album pages without help from a steamroller. 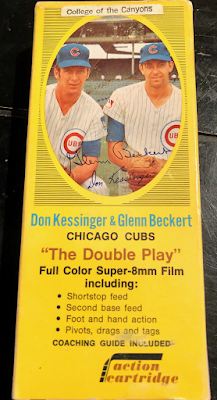 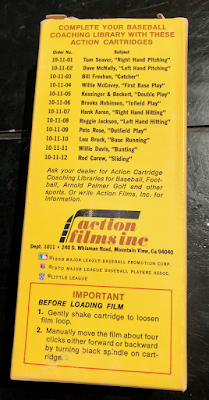 That back-of-box numbering (No. 10-11-05) means this is #5 in baseball's film series, just one sport under Action Cartridge's umbrella of cartridges for golf, basketball, football, and hockey (full baseball checklist). 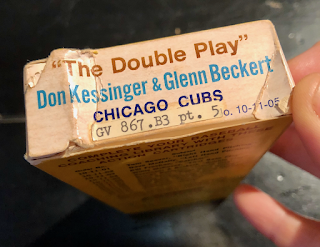 My eBay seller "inherited" this from library or school materials, based on the catalog sticker with its own numbering. Each cartridge includes a Coaching Guide booklet with tips about the skill shown in the film, like "turning the double play" or "bunting."

I assume the film clip's just a video highlight without additional commentary, hence inclusion of the Guide.


You can find films still in shrink wrap, others with cardboard backing, and still others in a pack with the camera and other films. 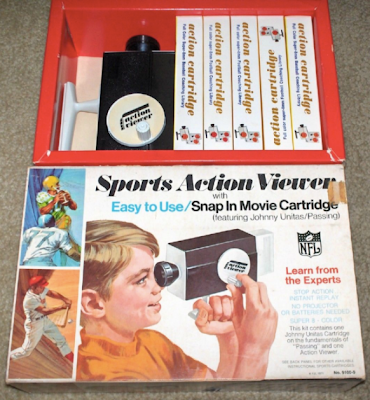 Action Cartridge produced several cameras during this product's life, including one with a backlight that required AA batteries. All used the hand-crank and viewing lens, but several had a foot that allowed watching from a table top or in-hand (as shown on the box). 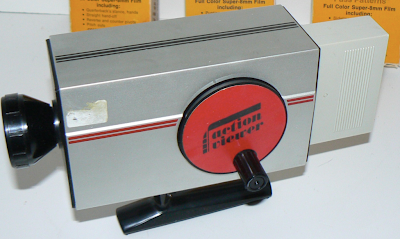 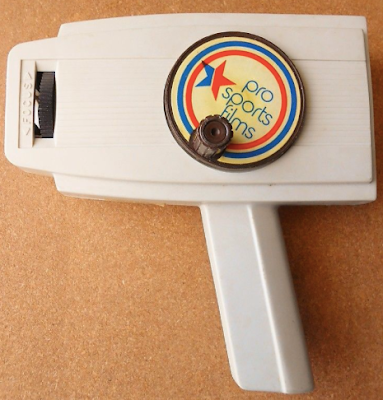 Value: I bought my second-hand #5 cartridge on eBay for ~$20 in November 2019. Films with superstars like Pete Rose, Reggie Jackson, or Tom Seaver might cost $50+ in high-grade. Unnumbered player "cards" (trimmed box panels) would be easier to store in pages, but sell for significantly less than intact packages.

Fakes / reprints: It'd be tough to fake a product this intricate and seems too obscure to make reprinting box panels worthwhile.

One thing I can't find is any digitized versions of their films. Until those surface, enjoy this Super-8 home movie of the Cubs and Mets (Seaver's win on July 22, 1971), which includes Don Kessinger--IN ACTION!

for a second there i thought i needed to track one down for my double play collection!

I've just bought a 1975 corgie hand crank super8 camera with a few super8 cassettes ,Im a Beatles collector and I'm thinking of either opening up a cassette or making using a 3d printer and replacing the movie inside with Beatles footage :-)