A century ago, it was customary for all players to wear "high socks," double-covering their lower legs with white under-stockings and athletic stirrups (usually with team colors) under each heel. They then bloused or rolled the pants at knee-level to keep everything in place on the field. (Video: how to wear high socks.)

Some fans make a point of celebrating high socks in the modern game, as most players now wear shoe-top pants for reasons of comfort and style. But it's worth remembering that baseball's socks didn't come from nowhere. The earliest, 19th-century uniforms reflected upper-crust college uniforms of the day, which in turn adopted their bloused pants looks from an imagined New York aristocracy, the Knickerbockers. Decades later, companies like Boston Garter continued to capitalize on this "high socks = high style" affectation. (I like high socks as much as the next guy, while remembering they're a tiny piece of humanity's ongoing fascination with being young, wealthy, and carefree.)


Johnny Evers didn't wear garters on the field, as that mid-calf strap would've been painful anytime he slid, but baseball's high socks style does draw your eyes to the right part of the body. Actual garters clipped to socks (under longer pants) and kept them from sliding down as men went about their day. 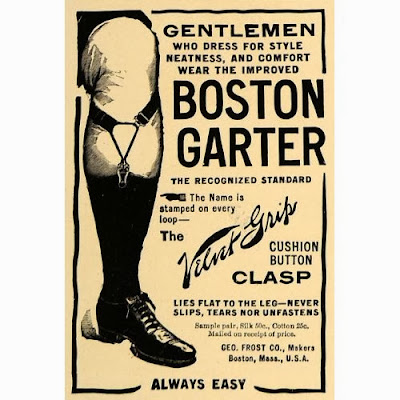 Today, we think of checklist numbering as an aid to collectors, but the bolded This is Picture Number 5 tagline probably helped shops know which players to request from Boston Garter. Early hobby catalogs dated this set to late 1913--just late enough to include that season's hitting and fielding stats--but #12 Buck Herzog also mentions his becoming Reds manager for 1914, which would've happened no earlier than his Dec 12, 1913 trade from New York to Cincinnati. Modern collectors agree on 1914; compare checklists and designs at Old Cardboard.

Value: Boston Garters type cards auction for $2000-5000 each in low grade, running much higher for superstars Ty Cobb and Walter Johnson. The 2004 Robert Edwards auction I used for these images closed at $8050 for two cards, #5 John Evers and #12 Charlie Herzog.


Fakes / reprints: 21st-century card producers Helmar Brewing created their own version of 1912's Boston Garter set and may expand to 1914's design at a later date. As a modern-made set, make sure not to confuse them with original Boston Garter ad cards. (Helmar creates new, original artwork for their cards, so compare authentic scans to familiarize yourself with the differences.)
Posted by Matthew Glidden