As of this writing, it was just ten years ago that Major League Baseball, then collective owners of Montreal's Expos, sent the squad to Puerto Rico for 22 home games in an effort to drum up ticket sales for a team that Quebec's ownership barely cared about. Many of Montreal's fans still bought tickets, but when corporate purse strings "can't afford" $50,000 on September call-ups to stay competitive for a Wild Card spot (details of this self-sabotage at Wikipedia), you can tell a team's doomed. Is it any wonder that former Expos owner Jeff Loria shows his current Miami Marlins the same fiscal unpredictability? 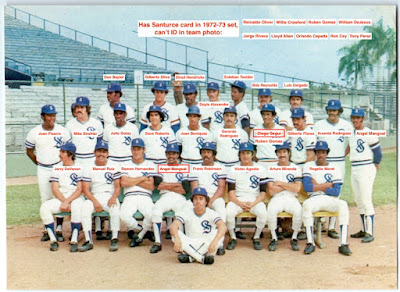 
Numbered backs include "Baseball de Puerto Rico" and "Printed in Spain" notes. While Puerto Rico gained a measure of government autonomy from colonial Spain in 1898, shared business interests continue to this day and apparently helped make this set possible.


Local icon Roberto Clemente got his own 9-sticker photo in Pirate uniform, indicating just how much Puerto Ricans loved their native son. The best-known MLBers from this set are #64 Mike Schmidt, considered a pre-rookie in 1972, and #222 Satchel Paige, whose notoriously long career included several stints in the Caribbean. Other HOFers are #132 Goose Gossage, #166 Frank Robinson, #195 Tony Perez, and #197 Orlando Cepeda. 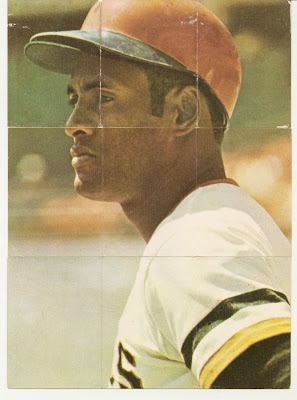 Many collectors would've mounted their stickers in this brightly-colored album, leading to considerable back damage for those removed later and now circulating in the baseball hobby as singles. (Almost all you encounter will be VG or worse.) 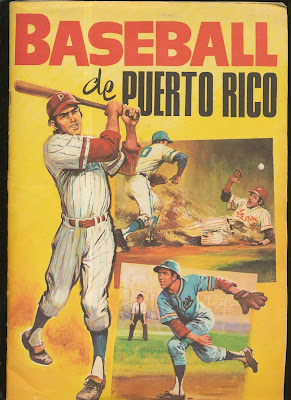 The face of Winter League ball--related in part by the history of its Caribbean Series-- changed as minor league affiliations became more codified and scouting resources improved throughout the majors. Local Caribbean economies waxed and waned, so individual leagues sought a more reliable source of funding and ultimately evolved into baseball's off-season farm system. (I noted last week that Cuba will soon allow foreign teams to sign its citizens without defecting, a sea change in political and sports policy that includes a return of national representation to the Caribbean Series for their first time in 50+ years.)

Value: I purchased the complete team set (#1-9) for $57 on eBay in late 2018. When these do appear in the market today, I've seen uncut 3-card panels and team sets. No one's slicing the team photos into hodgepodge singles anymore.

Fakes / reprints: Haven't seen any in the marketplace, but the demand for superstars like Clemente make it possible. I recommend buying from dealers who carry and know the Caribbean market.
Posted by Matthew Glidden

What type of material is the Roberto Clemente 1972 Puerto Rican Baseball Sticker Panel made out of and what is the exact size uncut.
Please email me at wireddawg@yahoo.com and put Clemente in the subject line so I know it is from you.
Regards,