Raised on the sandlots of his native California--one of three sons who chose pro ball over fishing for their father--DiMaggio's success as a teenager in the Pacific Coast League spurred New York to send four (!) players to his first pro team, the San Francisco Seals, in trade for young Joe's services. (The Yankees added $5,000 when one of them, infielder Doc Farrell, refused to join the Seals.)


That 1934 ACME picture is a head-on shot from the same Seals photo session that celebrated Joe's trade and became the source for several Goudey cards (below). Gum companies often appropriated news photos to save money and time, either with or without paying the wire service, and I think Goudey used this one because his Seals uniform could also pass for New York, once you hazed out the background and darkened its pinstripes.


Goudey offered these "Premiums" (better described as paper-thin photo postcards) at candy stores in exchange for pack wrappers, an early "customer loyalty program" I covered in The Knot Hole League set profile. The following year, a face-only version of this photo appeared on a cartoon body for Goudey's first 1938 Big League Gum series, which ran #241-264, "extending" 1933's set of 240. 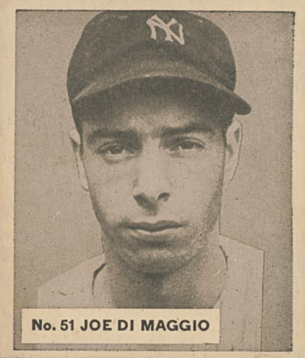 Sharp eyes will recognize this as a match for the Joe DiMaggio card Mr. Burns gave to Homer Simpson. Mark this as the only time I've seen "adjudged" and "poled" on a baseball card.

Whatever "rookie" opinion you ascribe to, kids didn't have to wait long for more DiMaggio.

Joe's last cartoon hints at how "Hall of Fame" meant something more poetic to fans in 1938. It was just five years after Cooperstown opened its physical location, so brick-and-mortar visions of enshrinement seemed interchangeable with legend and euphemism. Notable players and achievements rated Hall of Fame status in their own time, instead of waiting for others to "make a case for inclusion," in the language of today.


Like other native Italians, the DiMaggio parents suffered state persecution during WWII and Joe himself lost three prime years to military service, leaving him quietly (and I'd say "justly") bitter about the war's effect on his family and career. Esquire writer Gay Talese captured Joe's demeanor in retirement with "Silent Season of a Hero," considered one the best essays on baseball and, given its subject, fame.


Goudey featured DiMaggio at every opportunity following his 1936 debut, so it's possible ACME's 1934 wire photo saw additional use along the way in other ephemera since lost to time. While not an exhaustive look at his history on cards, it shows how one image can (and will) make its way around the hobby. Buon compleanno to Joe and his many fans.
Posted by Matthew Glidden