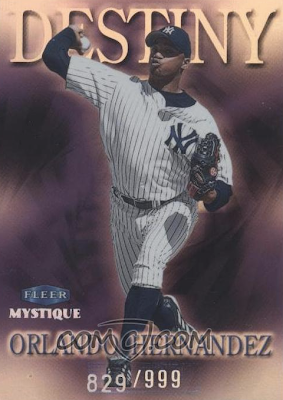 El Duque hit the Yankees in a big way in 1998, as the 28 32 year-old "rookie" went 12-4 during the regular season and then made his first of 4 straight trips to the World Series. Orlando notched 9 postseason wins by the end of 2001, making this card bio a little eerie in its prognostication. 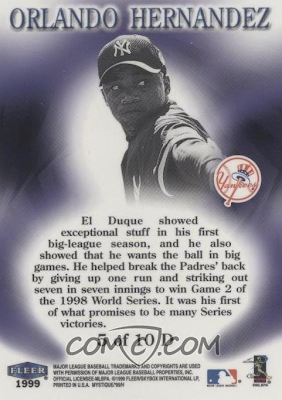 Hernandez stands out both as ballplayer and--intended or not--negotiator. Thanks to his (or his agent's) successful handling of the murky waters of defection, Cuban capture, and the US State Department's "humanitarian parole" rules, El Duque sought and signed a contract with New York first, dodging the amateur draft most players are subject to.

These angles of Orlando's story stand to change, however, should Cuba follow through with their announced plan to allow players to sign foreign pro contracts without first defecting to another country. With more money expected for local leagues and from foreign contracts, I think béisbol stands to gain from a straightforward scouting process and freer flow of skill throughout North and Central America. Ideally, we'll see politics move to the back burner for excellent players seeking a stage elsewhere.
Posted by Matthew Glidden