I'll never get tired of the Tucson Toros, thanks in large part to their infamous 1980 toreador uniforms. But you know who else felt that nostalgic glow this summer? The current Tucson Padres, who ordered a new batch of the "Tequila Sunrise" Toros outfits for throwback games in June.


The best part? They had to use TCMA's 1980 minor league baseball cards as a design reference, because no one in the organization could find an original kit. (Note all the scanned shots in this TV report.)


Prior to their Astros affiliation--one inspiration for those gaudy duds--Tucson's earlier look featured a horned bull on the jersey and stripes on the cuffs, as modeled by 1976 type card Mike Weathers.


Mike's green face isn't a scanning artifact, card publisher Caruso really did tint the whole front. Most of their other sets stuck to white--compare to a 1975 PCL team--so the effect's a little weird. (I assume that stars-and-stripes bunting marks America's bicentennial, a popular stylistic choice for 1976.)

Caruso printed 20 Toros in this set, most of them future big leaguers (in bold).

In eBay's correct, Caruso didn't make the only 1976 Tucson Toros set. This similar black-and-white set looks like a team-printed version, probably numbered by uniform. (From what I can tell, it lacks a #5.) 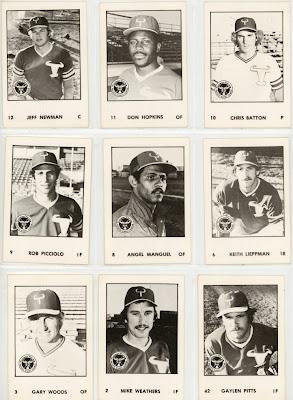 Value: Today's #5 cost $3.50 on eBay, a little higher than I usually pay, but 1970s minor leaguers aren't easy to come by if MinorLeagueSingles.com doesn't have them. Team sets likely run $20-30 for lack of MLB stars.