Infamous (notable, notorious, revered, reviled, etc.) dictator and baseball fan Fidel Castro would've been just 21 years old when this sepia set of profile photos hit Cuban souvenir shops. Like earlier Havana-made efforts from the 1920s and 1930s, its "cheap" look reflects a mix of photo reproduction costs (expensive) and desire to capitalize on the sport's exploding popularity (expansive). As with most ephemera, their construction hoped to catch the eyes of buyers instead of lasting for decades, so few survived to reach modern markets. In fact, this scan from CubanBall.com's profile is the only #5 I've seen.


This set's 50 subjects (checklist at CubanBall.com) played during Cuba's pre-revolution era, when foreign money and gangsterism held influence throughout Havana. (Indeed, Castro spoke out against this back-scratching corruption, making headlines as early as 1947 itself.) Amidst the country's political and social heat, American baseball scouts found Cuban racial integration favorable to tryouts and signings in the wake of Jackie Robinson's debut, as stateside teams added more non-white players. While helpful in a business-of-sports sense, some critics continue to find MLB's actions in Central America more exploitative of the area's poverty--pushing native sons to "escape" with a baseball contract--than supportive of local teams and fans.

UPDATE: Forgot to mention S.I. September 27 story about Cuba's announcement that athletes can sign pro contracts without defecting, a sea change in country policy that abolished paid leagues following Castro's rise to power. Not clear how (or if) this will change MLB approach to player scouting; it might just become more visible. 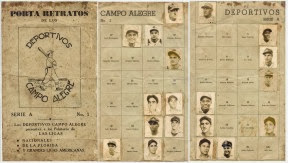 Owners of this gatefold album could stick all 50 players to a pair of 2x6 grids, with manager spots reserved for #1 Miguel Gonzalez above Deportivos and #2 Adolfo "Dolf" Luque (1920s MLB star) above Campo Alegre. I assume albums prove even more elusive than individual cards and appear only at auction.

Fakes / reprints: Haven't seen any in the marketplace, but they're possible. If you're unsure of Central American set authenticity, try an expert source like the Net54 postwar baseball forum and include scans when possible.
Posted by Matthew Glidden