Hey, it's December! Catch you by surprise, too? 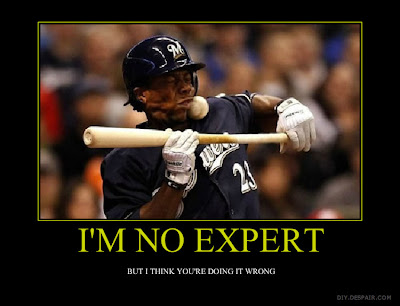 The calendar's back end lays claim to nostalgia season, our "November and December to Remember" period. Some count the days to pitchers and catchers reporting. Others analyze trades and prospects. I use the off-season for researching statistical oddities like "first DH to play 162 games" (Hal McRae, 1977), "most doubles without a triple" (Edgar Martinez, 52 in 1995), and "highest HBP-to-K ratio" (Kid Elberfeld, 25 HBP, 5 K in 1911).

Esoteric numbers are fun, but "all-time best" or "all-time worst" stand apart, so how about something all-encompassing, like "worst-hitting season by a regular player." That notion calls to my mind notorious "hitters" like Ray Oyler, Mark Belanger, or Mario Mendoza, good fielders who played during pitching-friendly eras, but--surprise!--their brand of lousy batting is still too good for this list.

For hitting, I used Adjusted OPS (OPS+), which is On-base Plus Slugging (OPS) neutralized for factors like hitting era and ballpark. For "regular players," I picked guys who appeared in at least 100 games. This allows for late-inning defensive replacements, but their at-bats show up in the stat sheet like any other, even if managers don't lean on those skills.

These 5 terrible hitting seasons all came from guys I'd heard of, even if barely, thanks to the long history of card and stat collecting. Baseball squeezes its past with both hands!


How did Mick notch that single digit? 1980 Topps blog #323 notes he was first and foremost a glove man, so rarely found himself in the position to drive in runs or win a game. Those 105 games included only 19 starts and 10 came in September, with Chicago out of contention.


Benjamin returned for his 13th season in 2002 after missing all of 2001 due to injury. Pittsburgh started Mike at third or short early in the year, but switched to defensive subbing when his average dropped to .150 and stuck there.

Highlight: Mike Benjamin wore #5 for the Phillies in 1996! (I bet he saved some runs in 2002 with the glove, but can't find any games where his bat made a positive difference.)

Lowlight: If OPS+ included base-running, going 0-for-4 in stolen bases would drop this season even further.


Sweet biscuits, we better chalk Bergen's last three years up to "the game was different then." I pushed the 100 games cutoff a bit for 1910 (89 games) and 1911 (84 games), but he batted enough in those years to mean more to his team than Kelleher or Benjamin above.

Bill could be patron saint of a chaotic era for backstops, as he threw out 138 runners in 1909--most in the National League--but that's still less than half of all attempts. Hitters in the dead ball era played an aggressive game on the base paths and his defense provided some measure of control. Bergen often placed at or near the top in fielding % and similar range stats, proving useful to Brooklyn despite swinging an empty bat.

Craig Counsell's "oh-fer" streak for Milwaukee in 2011 briefly resurrected Bergen's name as the previous record-holder for non-pitchers. Craig and Bill now sit tied at 44 straight fruitless trips to the plate.

Brooklyn never came close to challenging for the pennant during Bill's career, making one poor batsman more or less irrelevant. I consider him above-average at one key skill instead of falling down at others.

Highlight: Hit his second (and final) career homer on September 6, 1909. Most in those days were inside-the-parkers, so some of Bill's 21 career triples might've been slow-jog homers in modern stadiums.

By this measure, Mario Mendoza's most Mendoza-like year is 1979 (25 OPS+ in 148 games for Seattle). For all our Mariner fan hate, the 40 OPS+ Chone Figgins posted over 81 games in 2011 ranks just third-worst for a franchise regular; Manny Castillo split the difference with a 35 OPS+ in 1983.

Anyone else have a favorite (or un-favorite) bad year with the bat?
Posted by Matthew Glidden

There's a whole list of lousy OPS+ old-school type leadoff guys: Guys who ran fast but didn't get on base or hit for power. But those scores are in the 70-80 range usually.

Alfredo logged 3 of the worst-hitting 15 seasons by everyday players; Brian Hunter's 1997 (another high-steal, low-OPS+ year) is close behind.