In 1980, Clinton (Iowa) kicked off their new SF Giants affiliation with this set of black-and-white cards familiar in design to those who've seen other TCMA entries. A tip of the hat to their photographer for creating one unforgettable, slack-jawed image. 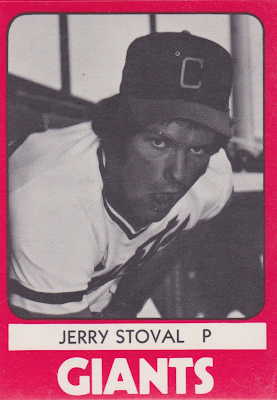 I tried to find any other photo of Jerry in a uniform for comparison, since this is about as awkward as awkward gets, but Google turned up nothing. If you know of something, drop a line and I'll post it here. 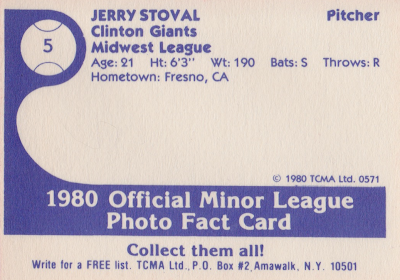 Not sure if Jerry's switch-hitting gave him an edge, since pitchers can swing an empty stick if they throw well enough. I do know that 3 such multi-talented hurlers made it to Cooperstown, 2 of whom appeared on #5s.

(Robin Roberts was the third HOFer to hit from both sides, but without a known #5.)

Trivia: Rob Deer's first season (1984) included 3 RBIs, all from his own homers. That's tied for most single-season RBIs by a batter who only knocked himself in, a "feat" accomplished by 7 guys all-time. (Most recently, J.R. House turned the trick over 19 games of work for Baltimore in 2007.)

UPDATE: Thanks to Jon Dunkle for scouring eBay and finding these shots of Jerry as a Clinton Giant and his dad as a running back. The open-mouth thing looks to be a Stovall trait. 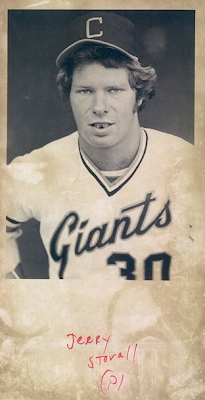 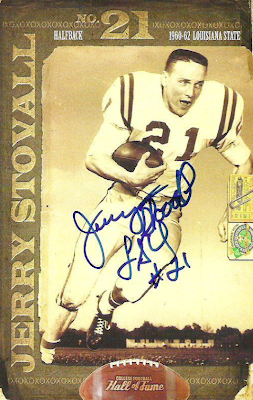 Value: This #5 cost $2 at MinorLeagueSingles.com. Team sets with Rob Deer run a little above average at $20 and up.

Fakes / reprints: TCMA reprinted some of their team sets for "collectors kits" in the 1980s. Those cards have backs with black ink. Originals (as above) have blue.
Posted by Matthew Glidden