34 years ago today, Pirates infielder Jim Fregosi pinch-hit in the 9th inning with the score tied 3-3 and a go-ahead run on second. Phillies manager Danny Ozark brought in fireballer Tug McGraw, who sent Fregosi down swinging. It would be Jim's final strikeout in an 18-year career and he retired as a player (and unofficial bench coach) two days later. 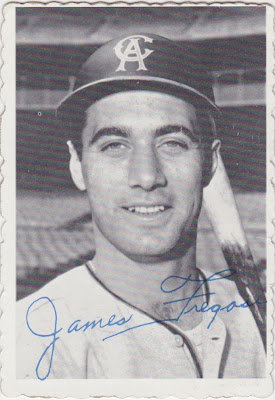 Jim had a special motivation for retiring mid-year, as he'd struck a deal to return to LA as the new Angels manager. California finished 62-54 under him, not bad for a rookie skipper, and just 5 games off the AL West pace set by Kansas City.

Note that May 29th marked Fregosi's last strikeout, but not his final game in Pirate pinstripes. Read my 1966 O-Pee-Chee #5 profile for a breakdown of his last month as a player, Chuck Tanner's love of double (or triple) switches, and Jim's one career inning at second base. 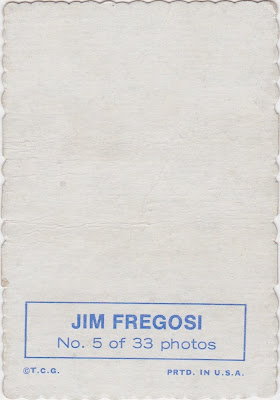 This decorative "deckle edging" gave today's 35-player set (33 original + 2 variations) its name. Of Topps' many promotional inserts, Deckles (DECK-uhls) remain one of the easiest to find online and at shows, but don't confuse them with 1969 Decals (example below), a different--and also prevalent--insert set from the same year. 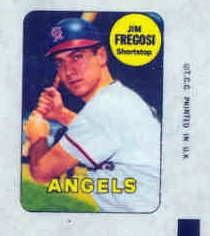 Two of the set's original players changed teams mid-year, so Topps subbed them for other, less transient players: #11 is either Hoyt Wilhelm or Jim Wynn and #22 is Rusty Staub or Joe Foy. (Find the full checklist at Dean's Cards.)

UPDATE: Did you know Fregosi is the Angels leader in batting WAR? Thanks to High Heat Stats for the tip.

Value: Low-grade singles cost $1 or so, more for enduring stars like Clemente. (The variations carry no special premium.)