Former Topps card artist Bob Parker turned his love of baseball into a profitable sidelight for much of the 70s and 80s, sketching out single-tone sets that he sold to collectors at shows and by mail order. Like this #5, Parker embellished player profiles with extra cartoons, highlights, and details on each blank-backed postcard. (As mentioned in the "More Baseball Cartoons" profile, his design evokes 1938 Goudey, a nice callback for any set to make.) 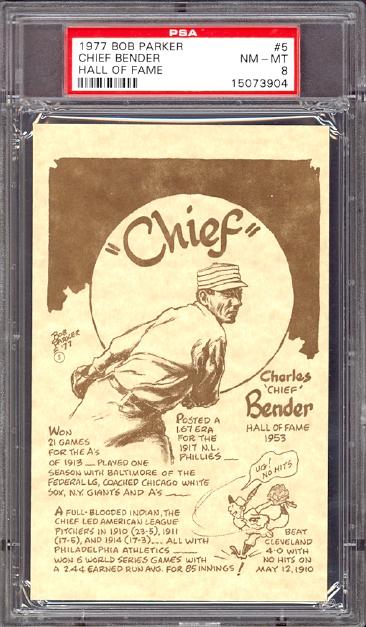 One event this #5 doesn't mention is the 1911 World Series, where Bender did something unseen in the 100 years since. He threw three complete games in a six-game series, winning twice and giving up just 8 total runs to John McGraw's Giants. That's the same series where "Home Run" Baker earned his nickname by hitting crucial homers off Hall of Famers Rube Marquard (game 2) and Christy Mathewson (game 3) en route to an Athletics title. (Parker's Hall of Fame set numbers 54 cards total and turns up often enough on eBay or at shows that Bob must've sold a bunch.)

If you love HOFers but don't want to spend the scratch, check out artist Summer Anne Burton's chronicle of each member of Cooperstown at Every Hall of Famer. That's her take on Marquard, a 1971 Vets Committee selection central to the drama of Home Run Baker and the 1911 series.

Fakes / reprints: It'd be easy to reprint these with good paper and modern equipment, but I doubt it's a risk, given their low profile in the hobby.
Posted by Matthew Glidden