Baseball artist Bob Laughlin stepped away from his usual stylized drawings for this 42-card retrospective of a shifting squad of Negro League-era ballplayers and entertainers, the Indianapolis Clowns. From 1929 through their last games in 1988, various rosters played in both barnstorming tours and Negro League games, winning the title in 1950. This set's a mix of solo and multi-player photos, including one 1952 photo of young shortstop Hank Aaron, who the Clowns sold to Milwaukee for $10,000 after the season. 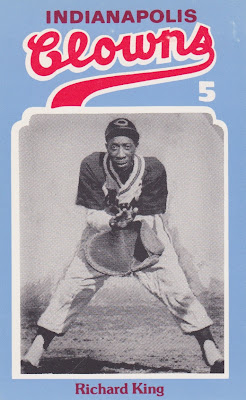 Unlike Aaron's one-and-done time in uniform, Richard King ("King Tut") spent three decades with the Clowns and sports an oversized prop mitt as one element of his on-field mix of exaggerated costumes and baseball skills. The card back goes on to praise King's personality, which no doubt helped as both entertainer and teammate. 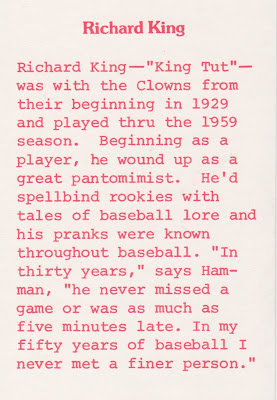 30 years of entertaining gave King Tut plenty of time to build out a stunt repertoire and he appears in jacket and tails as part of the juggling sequence from this Clowns highlight film. (The clip itself focuses mostly on teammate and future Globetrotter Reece Tatum.)


40 numbered cards feature players and Laughlin added unnumbered title and "laff book" cards to round out his set. Find its full checklist at OpenChecklist and Laughlin's art sets in my type archives.