Tomorrow marks the 63rd anniversary of Harvey Haddix's 12 perfect innings, as he sent down 36 straight Milwaukee Braves (back-to-back pennant winners, no less!) before losing to a single unearned run in the 13th. His expression on this card says a lot. 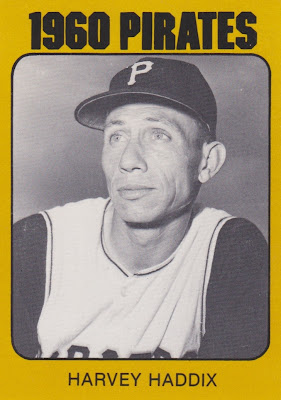 The box score's almost painful to look at, as Pittsburgh collected 12 hits without scoring against Milwaukee's Lew Burdette. How rare is that? Just 17 teams ever collected more than a dozen hits and were still shut out. MLB's all-time record is an extra-inning game between--naturally--the Pirates and Braves (August 1, 1918 box score). 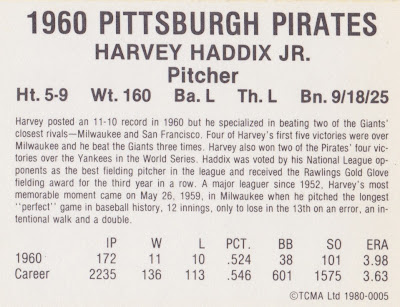 Harvey's effort stands out so well in history that Sports Illustrated called it The Greatest Game Ever Pitched and musicians The Baseball Project honored Haddix (and all of baseball's perfect games) with this eponymous song.


But don't feel too sorry for Harvey, as he took home a title soon after. Today's TCMA set revisits those 1960 World Champion Pirates, who memorably beat the Yankees 10-9 in game 7 on a walk-off homer by Bill Mazeroski.


"You can deploy a lot of script writers and pay a lot of money, but try and write a better finish! Drama...excitement...this game had everything."

TCMA liked this Pirates team so much, they printed direct-to-collector sets in both 1977 (set profile of #5, Don Hoak) and 1980 (today's post). Front and back designs differ enough to avoid confusion, other than why TCMA "re-honored" the same team so soon after. Find 1980's 41-player checklist at MillerCards.net.

Value: TCMA charged a few dollars each for these nostalgia sets at printing and prices haven't climbed much. Clemente and Mazeroski singles run $5+ in nice shape, but Haddix and other lower-profile teammates sell for a dollar or two.

Fakes / reprints: Other than replicating the spirit of their 1977 set, I haven't seen any reprints in the marketplace.
Posted by Matthew Glidden