Cleon Jones, 1969 All-Star and key member of the Miracle Mets (series highlights at SABR), made his first oddball set appearance in these Topps posters (a.k.a., All-Star Pin-Ups), which the company inserted singly into 1967 wax packs as late-season enticements for kids. O-Pee-Chee replicated this promotion for their own release in 1968, so Cleon got a second trip to the plate. Fitting the 5"x7" poster size next to regular cards meant folding them into quarters; the detailed scan shows light creases at the mid-points. T.C.G. is Topps Chewing Gum on that tagline and PTD. IN CANADA draws a line in the snow between O-Pee-Chee and Topps posters. For unknown reasons (editor mistake?), O-Pee-Chee used the same players, but changed their numbers. Cleon got lucky #13 in the U.S.A. version. There's a lot going on here for such a straight-forward photo. First off, Cleon is one of just 32 posters, rubbing shoulders with superstars like Mantle, Mays, and Yaz (full visual checklist). And speaking of baseball royalty, that's all-timer Yogi Berra in Mets uniform on the right border. His appearance as a coach helps date the photo to 1965, as does the New York World's Fair patch on Cleon's sleeve, which the team wore from 1964-65 (more uniform info at Ultimate Mets). Final confirmation comes from the fragment of 3 (from #34) on his back, which Cleon ditched for #21 in 1966.


Cleon's the only Mets player in this poster set, perhaps by virtue of being an All-Star Rookie on 1967 Topps #165. The 1967 Topps blog rightly critiqued several of the publisher's checklist choices, but available photo quality--key for a 5"x7" release--likely drove player selection. 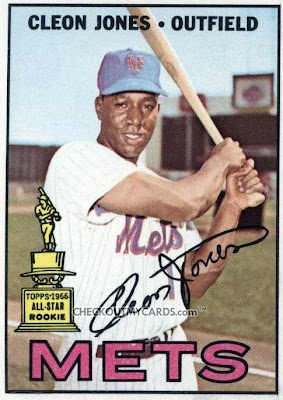 As mentioned above, Topps published their posters in 1967 (American set profile of #5 Carl Yastrzemski) and OPC replicated them in 1968. Canada's release schedule competed with hockey & CFL seasons, which left little time for multiple baseball series (and local fans were still a year away from the debut of Montreal's Expos).

Given these other commitments, I assume OPC baseball posters went into wax packs right away, instead of using Topps' strategy as late-season perks.

Value: I found Cleon for $.50 at a show table. Lesser-known singles cost a dollar or so, but stars like Clemente and Mantle can exceed $10.

Fakes / reprints: In addition to the full set, Topps reportedly made some sticker-back proofs with the same design, but somewhat smaller. I've seen collectors mention Clemente specifically, which would be quite a find.
Posted by Matthew Glidden