Hope that you already read the blog Cards That Never Were, but just in case you don't, here's another excellent reason to start: future MLB star (and likely HOF manager) Lou Piniella in a Pilots uniform. 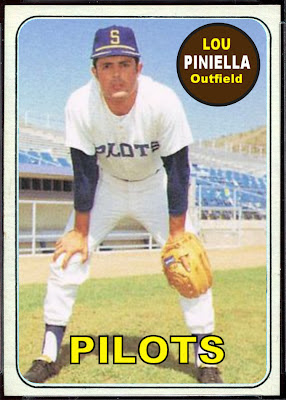 I follow Sweet Lou for several reasons, both sports and card related. The fact that it's Fan Favorite #5 is icing on the cake!

Back in 2010, I marked Lou's retirement with a profile of his 60s cards that showed his multiple pre-rookie appearances and how mixed-up Topps photos got during the expansion era.

This 1970 Topps Super, for example, shows Piniella hatless in a nondescript uniform, despite his winning AL Rookie of the Year for Kansas City at age 26. Lou's young, swarthy face doesn't resemble his 1969 skin tone, though--it looks like an alternate 1963/64 photo with the Washington Senators.

Best I can figure, Topps thought a "Rookie of the Year" should look fresh-faced, so turned the clock back 7 years. Mission accomplished!
Posted by Matthew Glidden