Today's #5 features Roberto Clemente, one of our pastime's most significant players and humanitarians. Baseball fans know him for his all-around excellence, including his 3000th hit...


...but he deserves the longer, biographical treatments of shows like SportsCentury (30 minutes in 4 parts).


Roberto played away from the national spotlight of New York and Los Angeles, but many collectors find him an appealing specialty, so demand remains high, even 40 years after his passing. (I place his hobby value on level with Willie Mays and Sandy Koufax, just a step below Mantle and Ruth.) 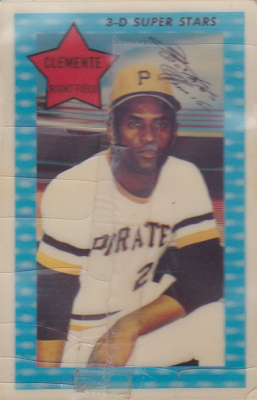 This Kellogg's pseudo-3D card looks much like many others found in a 70s cereal box, but that Pirates uniform's not just any "home whites," it's a trend-setter. From the MLB's uniform history page:


1970: The Pirates became the first major league club to adopt the new double-knit fabric uniforms, which they debuted at the first game at the new Three Rivers Stadium. The jersey became a pullover with no button or zipper. The pants contained a built-in sash belt. The cap crown was mustard yellow with a black bill. Within two years, nearly every other club was wearing a double-knit uniform. CARD BACK TRIVIA: Rudy York still holds the AL mark of 18 homers in one month, one of baseball's longest-standing power records. Sammy Sosa set the MLB standard by clubbing 20 in June, 1998.

Card blogger Night Owl wrote a personal retrospective on the Kellogg's evolution called Shrinkage and it's worth your reading time. I've only finished one of its sets (my birth year, 1972), but 1970's Jim Palmer was once the Oldest Card in my Collection.

Value: Clemente's a key card in any set, so cost more than the low-grade average of a dollar or two. Pretty sure I found this on eBay for $5.

Cool indeed! And that was no easy era for hitters, either...