I've set the WABAC machine to 1972 for something 70s collectors will recognize from their breakfast cereal days. Today's 54-card set (not including a couple dozen variations) marked the third annual XOGRAPH 3-D effort from Kellogg's, who picked up the funky visual technology soon after Topps tested it internally. 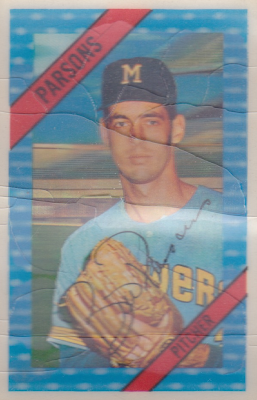 Thanks to my taste for low-grade, this Brewers right-hander has so much craquelure he looks like stained glass. As seen in other Kellogg's posts, the two-layer plastic cards age poorly because their fronts shrink slightly over time, but the backs don't. They start by curving at the top and bottom, then become fragile and vulnerable to creases or cracks. Once cracked, they never go back!

Even when they don't crack, the curling is a real issue for high-grade collectors. I have seen others flatten curved-but-uncracked Kellogg's with a hair dryer or iron (protected by a towel to avoid burns and melting). The newly-flat cards apparently remain that way for a month or two before starting to shrink again. 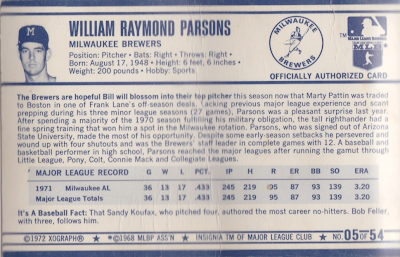 THREE FACTS FROM THE CARD BACK!

Read the XOGRAPH articles at Topps Archives for much more about the company's 3-D experiments!

Value: Low-grade Kellogg's cost a dollar or less. Even the stars go cheap when the cracking sets in. Roberto Clemente is the key card for 1972's set.

I'm trying to picture my wife walking in on me blow-drying a Kellogg's card.

A call to the lawyer to begin divorce proceedings will follow.