1979 meant mostly orange waves under black-and-white photos for TMCA minor league cards, as seen in several earlier team sets. This doesn't mean founder Mike Aronstein and his staff avoided full color; they'd already put it to use for MLB retrospectives like The 1960's (#5 profile). Small-town A and AA-ball teams promoted their players on thin budgets, so might've asked for "cheap" over "pretty." By 1980, TCMA added color and plenty of teams took that option. (Funny how people will spend more for a premium product when you give them the choice.) 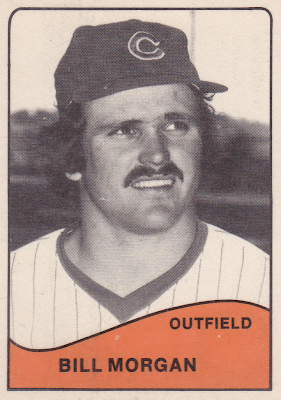 TCMA card editors called this man Bill--born William Arnold Morgan--but Baseball-Reference.com knows him by the more memorable moniker Tex Morgan. If I were Bill, you can bet Tex is what I'd want on anything sports-related. Bats, autographs, hats, you name it. Give me a Tex monogrammed sweat towel! 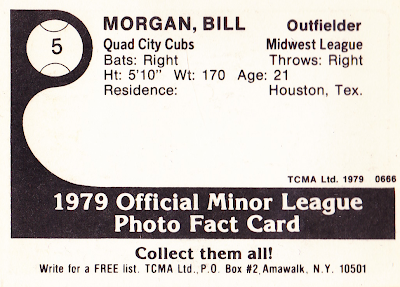 Tex spent 1979 and most of 1980 shagging flies for these Cubs. He never crested above Midland's AA team, unfortunately, as hitting .212 in the minors rarely means success in the majors, and retired after 1981.

Marvel Comics ran their own Tex Morgan comic back in the 1940s and 1950s, which I suspect inspired guys named Morgan to adopt it themselves; can't get more cowboy than six-shooters, spurs, and a bandana. (Follow the image link for more comic covers.)

Value: This #5 cost $2 from MinorLeagueSingles.com, about right for late 70s cards of guys who didn't reach the majors.

Fakes / reprints: Haven't seen any 1979 reprints. TCMA did reissue some 1980 team sets in the late 1980s, so it's possible 1979 cards also reappeared. (Unfortunately, I'm not sure how you'd tell them apart.)
Posted by Matthew Glidden