The late 1960s Coke caps comprise several brands, all still sold today in one form or another: Coca-Cola, Fresca, Tab, Sprite, and Fanta. Most feature players with blacked-out team insignias, given the changing nature of player and team licensing in the mid-60s union upheaval, led by the stronger MLBPA and director Marvin Miller. Mr. Brandon's hat has an O or zero on it, which might've been scratched in by a young collector. Other team logos remain, including the LA on 1967 Coke Dodgers #5, Don Sutton. 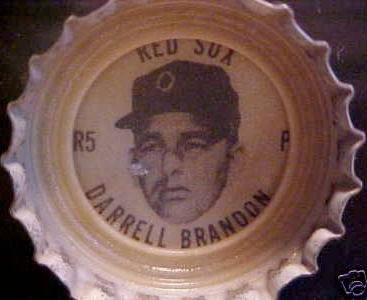 Collectors differ over what to call these Coke toppers. The Sports Collectors Digest annual price guide calls them bottle caps, which I favor despite its ho-hum descriptiveness. Others call them crowns to separate them conversationally from baseball uniform caps and match the worldwide cap collectors market. (See BottleCrowns.net for an extensive non-sports collection.)

If you've seen Jose Santiago caps with different numbers (4 vs. 10), now you know why!

Value: Nipped this scan from an eBay auction, where Mr. Brandon sits at the asking price of $3.

Fakes / reprints: I doubt it's economical to fake a Coke cap.
Posted by Matthew Glidden