This man's done some of everything on the baseball diamond, from 5-time All-Star catcher to Kansas City manager to title-winning bench coach for the Yankees in 2009. I remember Tony Pena mostly for his unorthodox half-sitting stance, but it didn't keep him from leading the league in throwing out would-be base stealers or being the consensus best defensive catcher of the 1980s. 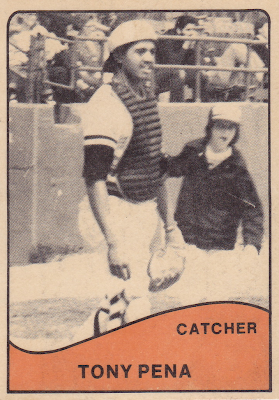 That kid looks super-excited to be batboy and I can understand why. Nothing thrills a 10 year-old baseball fan more than the thought of being so close to your favorite players and having a real job to do on the field.

This orange-on-cream card style matches TCMA's other 1979 team sets and reminds me of summertime creamsicles. (Mmm, sweet and fruity.) 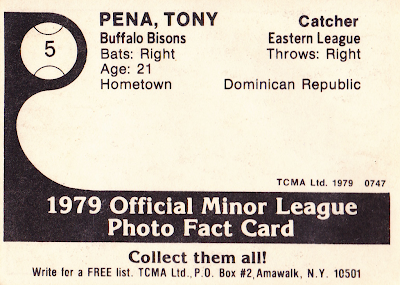 Buffalo elected Tony Pena to their franchise Hall of Fame in 2011. While it probably didn't generate the same excitement as winning a ring with New York in 2009, the embers of youthful nostalgia glow a little warmer when you're recognized for past achievements.

Value: Pena's minor league cards cost more than guys who never reached the bigs. A friend traded this one to me, but I estimate they'd cost $5 or so.

Fakes / reprints: Haven't seen 1979 reprints in the marketplace, but know that TCMA made late-80s reissues of 1980 teams, so it's possible they did so for earlier years.
Posted by Matthew Glidden