Today's TMCA team of minor league hopefuls is that rare set where the manager's career experience might exceed his starting lineup's...combined. 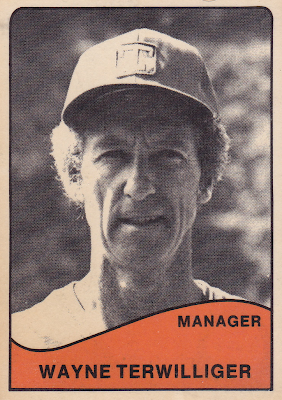 Wayne "Twig" Terwilliger spent more than six decades playing, managing, and coaching in pro ball. His web site--updated in 2009--cites a managerial retirement date of 2005, but Twig continued to coach first base for Fort Worth of the American Association through 2010, pushing his total to 65 years. 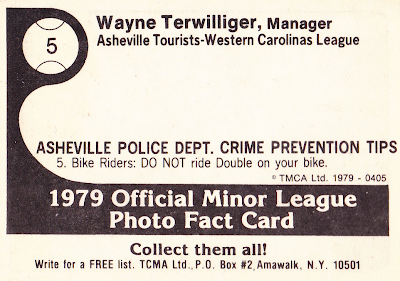 Hate to quibble, Asheville Police Department, but how is riding one kid per bike a CRIME prevention tip? Are they saying "don't be a getaway driver for bicycle bandits?" (That might be what they're saying.) 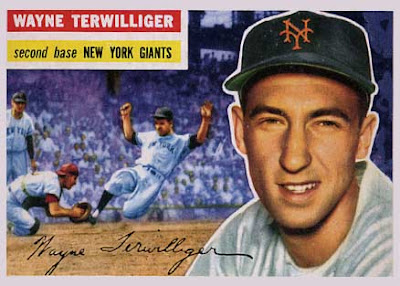 Twig appeared on Topps cards (as a player) way back in the 1950s. His 1956 action pose captures a nice slide into home, though it looks like the ball arrived first and they've got Wayne dead to rights.

Both Wayne's 1956 card and today's TCMA #5 appear in his site's baseball card gallery.

Value: This #5 cost $2 from MinorLeagueSingles.com. Wayne garnered plenty of cardboard in his day, but never rose to star level for collectors.

I got a chance to interview him for his book some time ago, a very nice man and great to talk to.

Very cool! A guy like Twig must have so many stories to tell. Was it hard to choose what to include? :-)