Last week, blogger cubbiedude profiled Bill James's 1997 book about baseball managers. He pulled a lot of good quotes from its pages, including this comparison of 1950s ChiSox helmsmen Paul Richards and Al Lopez.


“Both Richards and Lopez were ‘defense first’ managers. Lopez once said that all a team really needed was pitching and defense, because if you didn’t allow the other team to score, eventually they would give you a run, and you’d win the game. Richards was less extreme in this regard.” 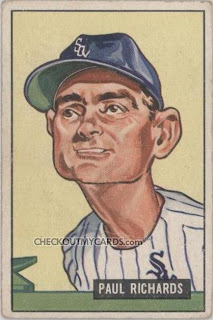 1951 Bowman #153
Al's teams captured 2 pennants, another area where Richards proved "less extreme" by winning none. He leads, however, in the all-important Bowman caricatures category. 1951's a favorite set of mine and Paul's card stands out. What says "field manager" like a parade balloon-sized cranium and 5-story neck?
Posted by Matthew Glidden