Baseball writers are burning a lot of oil today on Stephen Strasburg and his pending Tommy John elbow surgery. Since pitching and injury risk go hand-in-glove, let's look back to a player who turned his own ill fortune into a HOF career. 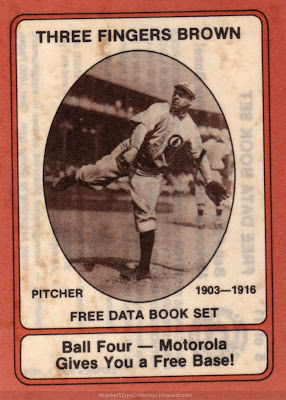 Card front
Mordecai Brown suffered at least one (and perhaps two) injuries as a young man, leaving him with about 1/3 of his first finger and poorly set broken bones in his second (pictures at his Wikipedia entry). It appears the "reshaped" hand gave his pitches unique torque, which he developed into one of baseball's best curves. 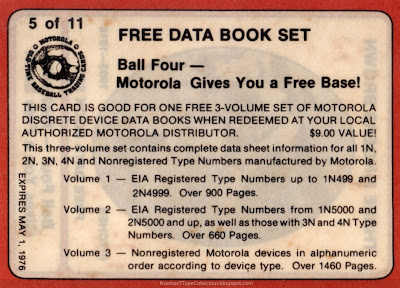 Card back
This 11-card set  includes several big names, including Ruth and Cobb. Brown's card back only includes redemption info, with no career stats or player info. Notice how the paper-thin stock allows you to see type through both sides.
Here's the set list of players, all HOFers or known for special achievements.
Value: As an obscure set of big names, prices vary quite a bit. I got this #5 for $10 from eBay, probably cheap since Brown was a redemption card for a set of Motorola data books. (See the back description.)
Fakes / reprints: They would be tricky to fake and probably hard to sell, but be aware that Motorola cards come on paper-thin stock and have a glossy finish.
Posted by Matthew Glidden

Email me your address if you would. I have some #5 cards for you sitting here gathering dust.

Let me know in my blog that you sent it, because I actually rarely check email these days.