Many collectors know slugger Andy Pafko for his Topps position of honor as their first 1952 card. While disregarded (and "undervalued") as a significant position into the 1980s, Upper Deck's use of Ken Griffey, Jr. to kick off their 1989 set also raised the profiles of vintage #1s, including Pafko. These days, even low-grade versions go for more than $100. 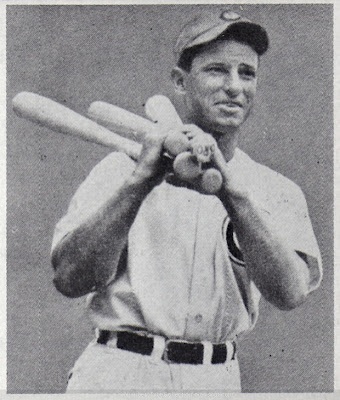 Card front
Andy's 1952 card also garnered a cameo in Kevin Smith's 2010 movie, Cop Out. Bruce Willis tries to sell his father's mint-condition Pafko to finance a wedding, which says something about both vintage card values and the cost of 21st century matrimony. (This also reminded me of Pulp Fiction, where Willis's need to recover his father's watch becomes its MacGuffin.) 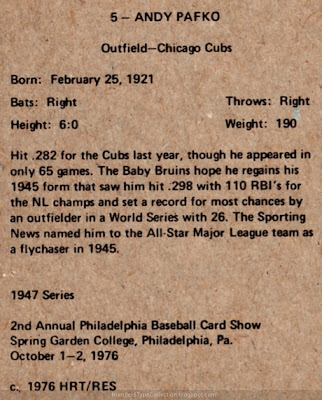 Card back
Philly Show promoters Ted Taylor (HRT) and Bob Schmierer (RES) created this "prequel" to 1948 Bowman baseball as a sibling to their 1942 Play Ball issue, already profiled in April 2010. Its 113 cards came out in 3 series and included both active players (like Pafko) and HOFers (like Ruth and Gehrig).


Wisconsin native Pafko played most of his lengthy career close to home, starting with 9 years in Chicago and closing with 7 in Milwaukee, including their 1957 World Series win. I'd never heard "Baby Bruins" as a nickname for the Cubbies before, but won't soon forget it.

UPDATE: Thanks to blog Vintage Sportscards, I learned that HRT/RES cropped their photo from this Andy Pafko Exhibit card. 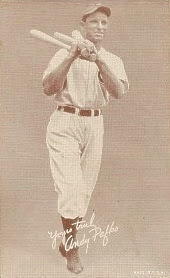 Value: I bought this card on Beckett Marketplace for $3, about right for a mid-70s oddball set.

Fakes / reprints: This is already an homage to vintage Bowman cards, if not exactly a reprint, and I doubt anyone would print another run of them.
Posted by Matthew Glidden