It's been over 30 years since this New York team captain died in a small plane crash, but the organization and fans haven't forgotten him. After leaving his locker empty in tribute from 1979 to 2008, their new Yankee Stadium's museum added it as an exhibit for all visitors to see and pay their respects to. 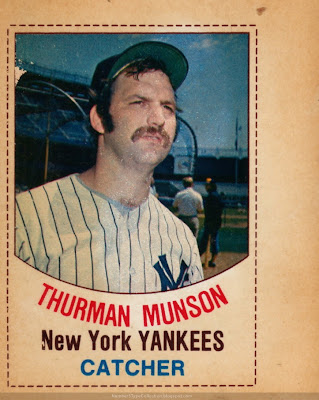 Card front
This blog already profiled a very similar issue, the "regular" 1977 Hostess baseball set, but that entry doesn't tell the whole story. The 150-card set does share the same checklist and basic design, but single-card panels like Munson were both collectible and packaging.
In the 70s, one- or two-pack Twinkies sat on a paper card, probably to prevent damage during the packaging process. (Today, they just come in a plastic sleeve, with no extra "support.") Three-packs, on the other hand, came in boxes, as shown in this ad. The staining on both sides of Thurman probably means he supported a two-pack of Twinkies. 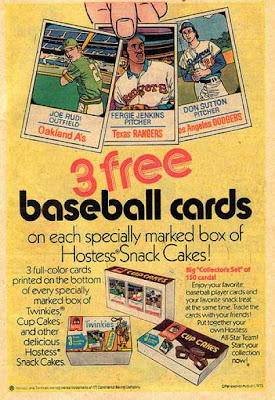 Local printers and packagers made the boxes and cards fit their own equipment, so players vary somewhat in size, text, and layout. Check out this "Twinkie Variations" Net54 discussion for several examples.
Baseball guides colloquially call them the "Twinkie" set, since that was the primary vehicle for this kind of card, but it's possible other products came wrapped this way. (As the above ad implies, Hostess made lots of different snack cakes.) Look for the black bars on each card back, as they distinguish a "Twinkie" from the regular 3-card-panel set found on boxes. 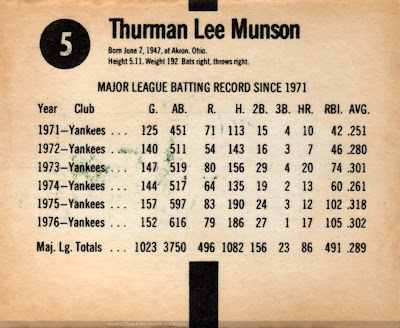 Card back
Value: This Thurman panel cost $13 at the 2010 National card show in Baltimore. Hostess sets don't cost a great deal, due to lack of demand and often poor dotted-line cutting by young collectors.

Fakes / reprints: Haven't seen any reprints in the market. I'm pretty confident this is real, given the cake stains.
Posted by Matthew Glidden

That's a nice card. In my zeal to avoid to vintage, I forgot I could probably find some cool Munson cards.

I got one Munson at the show. A 2001 Topps Archives (I think) jersey chrome card. I love it.

Cool, did they use a new picture on the archives card? Reprint one of his 1970s Topps?

Went to one SEA / NYY game way back in 1979 and wish I could remember Munson more specifically. At the time, REGGIE REGGIE REGGIE was the big impression-maker.

I just had a posting on this set a few days ago.

Hey, very cool! That 1977 uncut sheet is something special, even if it's not worth a bunch of money.