This blog recently profiled two San Jose Missions players, Ed Crosby (1978) and Mark Chelette (1980). While both played under Seattle's umbrella, the local ownership changed completely between those seasons. (This happens a lot in the minors, as local attendance waxes and wanes.)

Ogden bought out San Jose's Pacific Coast League affiliation prior to 1979's opening day and signed a AAA agreement with Oakland, which dropped Vancouver, BC, after 1978. San Jose then added a new single-A team, which joined the Seattle system, an arrangement that lasted through 1980. Today's Ogden A's also survived only 2 years before folding, but had the distinction of fielding Rickey Henderson for 71 games prior to his big-league debut. 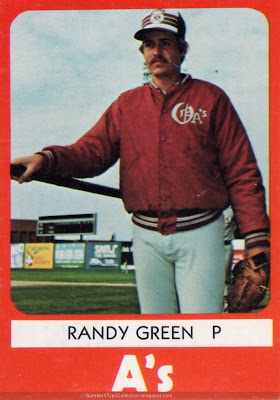 Card front
What about that warmup jacket, huh? Ogden really grabbed their red-on-white look and ran with it, something that echoes in the 1980 TCMA card borders. I'm not crazy about the color combo; this is one time when some Oakland yellow-and-gold would've livened things up for the better. 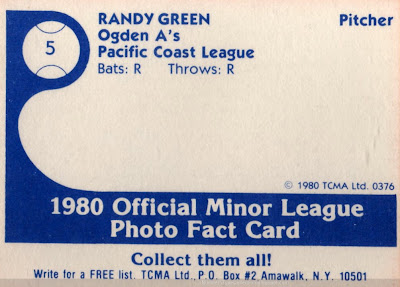 Card back
Wow, that's a really empty card back. For the official record, Randy went 3-7 for AA Waterbury and 5-7 for AAA Ogden in 1979, both teams in the Oakland farm system (career stats at Baseball-Reference.com). He stuck around the minors for 5 years, but never got a call to the bigs.

Fakes / reprints: Haven't seen anyone fake one of these red-bordered TCMA cards.
Posted by Matthew Glidden

Hey if you have the card I'd like to have you contact me my email is brittanyann1031@gmail.com he was my uncle who actually passed away in 1989 I'd like to see about purchasing the card as a gift for my grandfather his dad