Rochester, NY hosts the "longest-running minor league franchise in the history of professional sports," currently as AAA affiliate for the Minnesota Twins. Prior to 2003, they farmed for Baltimore for 40 years (including 1980), and St. Louis for another 40 before that, but the organization's history stretches all the way back to 1899. Zounds. 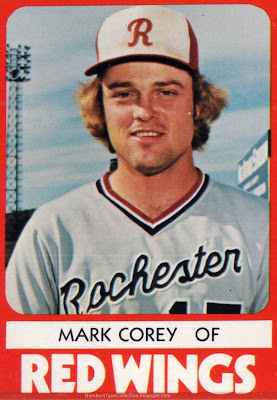 Baseball Digest profiled the Red Wings and their 20 league titles in May 2010. One thing I did not know: they've retired uniform (and very unlikely player number) #8222. St. Louis put the franchise and stadium up for sale in 1956, seeking to leave town. In less than 3 months, 8,222 residents banded together and bought shares in the team itself, Green Bay Packer style. Thanks to that surge of support, baseball stayed (and remains) in local hands. Fans called it the "72 Day Miracle" and made that number a hallowed one in Rochester. 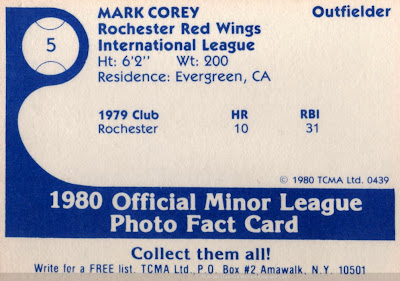 Also on the 1980 squad was Floyd "Sugar Bear" Rayford, now Rochester's hitting coach. That's a great nickname for any big-boned ballplayer, but was it actually "sugar," as noted on the coach profile page? Folks around the Internet remember "Honey Bear" and even "Huggy Bear," from the 1970s TV show "Starsky & Hutch." (That last one seems like a reach.)

Travis Lau of The Evening Sun sought out Mr. Bear a few years ago to find out for sure. Check the end of this forum for his article, which confirmed "Sugar Bear" as Floyd's nickname.

Value: Mr. Corey cost $2 on Beckett Marketplace, similar to my other 1980 TCMA singles.

Fakes / reprints: If Cal Ripken had been in this set, it'd be a real concern. Fortunately, he didn't make Rochester until 1981.
Posted by Matthew Glidden

It makes for a great day when you profile an Orioles Minor Leaguer. Great post, and amazing information on the Red Wings.

Cute sugar bear stuff there. Where can i possibly get one of that?

They're cheaper than I thought. Google Shopping says as little as $7.