Candy companies finally nailed a reliable, factory-producible chewing gum recipe in 1928. That, combined with the growing, gnawing Great Depression, opened the door for two sea changes in baseball collecting.
For the record, a packaged 1934 Goudey card and gum cost one cent. 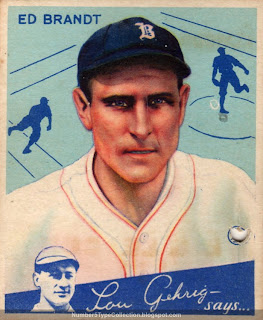 Card front
The blue Lou Gehrig banner decorates 2 sections of the 1934 set, cards #1 - 79 and 92 - 96. A red banner featuring hitting champ Chuck Klein appears on #80 - 91. I've read that Gehrig disputed his likeness appearing on every card and Goudey redesigned a portion of the high-numbered printing sheets pending a new endorsement deal, which apparently worked out. 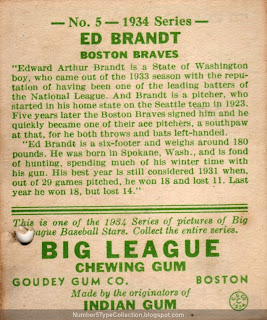 Card back
Ed Brandt, native of Spokane, WA, played a total of 11 seasons for Boston, Brooklyn, and Pittsburgh. I can't help but notice he's yet another 6', 180-pound player. It's a common enough size today--that's basically me--but probably seemed strapping in 1934.

Fakes / reprints: I've seen multiple 1934 Goudey reprints, both of star players and the entire set. Watch for "reprint" on the back or spots of missing paper near the "Goudey Gum Co." or "Boston" text on the back, where that word would be.
Posted by Matthew Glidden