Is this the worst picture one could wish on a best-of-the-70s player? A lucky #13 helmet, spaced-out expression, and way overexposed picture make me wonder about both Venezuelan picture technology and Dave's love of the game. 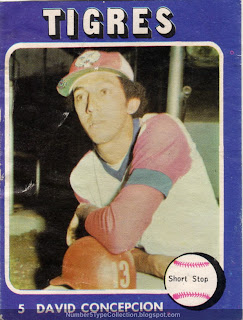 Card front (blank back)
It's not only the photo that defies expectation. Neither are 1976 Venezuelans "stickers" compared to typical American equivalents. Instead, they're printed on plain paper, without any "sticky" on the back. The set maker did make an album for organizing players into teams, but kids had to supply the glue. (It was, in other words, more like mounting stamps.)
So what's 10 times better than Dave's lousy #5 shot? Try this shot as a Reds player, where teammates like George Foster make you more bad-ass by sheer proximity.

GRRRR!
Value: This set's rare but low-demand, given its cheap construction and checklist of predominantly unknown (in the US) players. Concepcion is a star in the set, so cost me about $20. Like other Venezuelan issues, prices vary hugely, depending on a dealer's outlook and whether a buyer's willing to pay high book for typically low-grade examples.
Fakes / reprints: Never seen a reprint in the market, but it would be almost trivial to do with modern scanners and printers. I highly recommend buying Venezuelan cards from foreign-savvy dealers.
Posted by Matthew Glidden