Major League Baseball felt their foundations shake throughout the 50s and 60s, as franchise moves and multiple waves of expansion shifted the game from a bus-based tradition to a sport of cross-country travel. While the St. Louis Browns moved east to Baltimore, most teams went west into markets previously left to the Pacific Coast League. In all, 14 teams moved or debuted between 1953 and 1969. The Braves and Athletics even changed cities twice each during that time! Minnesota started smack in the middle of this shell game, playing their first American League season in 1961. While newcomers to the Great Lakes region, the Twins weren't an expansion team, as the franchise lineage points back to Washington's first baseball team, the Senators, one of the AL's 8 charter clubs.

In one of the majors' most unusual "trades," Washington, D.C. and Minneapolis-St. Paul essentially swapped the rights to receive a new team. After the 1960 season wrapped up, the Senators loaded up moving vans and relocated to Minnesota, leaving only the name behind. With them went rising stars like Harmon Killebrew, then-prospect Don Mincher, and a suspect cast of supporting characters. Baseball owners then awarded our nation's capitol a new franchise under the old name, much like NFL's Browns retained their moniker when Art Modell moved the organization from Cleveland to Baltimore. In a political sense, it worked like a presidential changeover, as the old staff packed up and new folks took their place. The departing squad consistently finished at the bottom of the standings prior to 1961, so I assume fans (and baseball owners) hoped Washington's fresh start meant a brighter future.

The Peters Meat Corporation printed this set as wrap-around panels for their "porkette" link sausages and hot dogs to welcome Minnesota's new team. While a 22 year-old Mincher played in only 27 games for the 1960 Senators, he merited this 1961 card on the strength of high expectations. 1962 and 1963 saw him in backup and pinch-hit duties, but he eventually became the everyday 1B when Killebrew moved to the outfield. Don led the 1965 pennant winners in slugging at .509 with 22 homers. 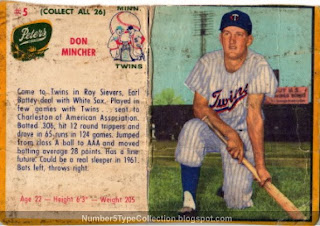 
This set used colorful, retouched photos reminiscent of 1954 Bowman. My copy of Mr. Mincher lacks the top half of the complete blank-backed wrapper; see All Marty's Stuff for a scan of the full product. This poorly trimmed example cost $10 on eBay, a fair price given the multiple creases and sullied front. Most full cards run at least $20-30 in average shape and go much higher in complete, unused condition. Affordable copies seldom reach the market, as many are already in team or player collections. OldJudge.com recently auctioned off a full, high-grade set for the final price of $1,065.