Some time ago, this blog profiled an odd-looking Ty Cobb card with the opaque American Card Catalog number of W516-2-1. For a player who struck fear into the hearts of opponents, its picture made Cobb look almost mild, just moving to his side with a glove. Today's sibling issue also sucks the energy out of Tris Speaker, one of the game's finest center fielders. Add some garish coloring and you've got one unusual collectible. So what's the W516 story?


First off, "W" designates all strip cards, cheap sets that sold several players together in penny or nickel vending machines for later cutting by collectors. The International Feature Service, an early Hearst news company, starting printing W516s around 1920 and tweaked its checklist as players changed teams, leading to plenty of variations and color changes. In fact, almost every print run looked different--compare the single-card scans in this post, which all came off the same scanner.


The American Card Catalog set its W516 designation in the 1930s, but modern collectors noted many differences in this visually crude issue. Numbering changes--such as Cobb and Speaker sharing #5--created a second checklist, subdividing it into W516-1 and W516-2. (Those with a portion of the Universal Base Ball Matching Cards phrase appear scarcer than others and may not exist for all variations.)


Once you're "within" a subset, further variations appear in the type and art. Somewhere along the way, card designers flipped the small "IRC (C)" logo and switched written to typed names. While based on a similar checklist and source photos, the two cards definitely don't come from the same editorial run.

So what's the total number of sets? I found a final breakdown from collector Rhett Yeakley on this Net54 forum thread.

That's 5 distinct strip card issues and the "(C)" logo includes either IFC or IFS, so variation hounds might count W516 as 10 different sets. (It's not clear whether IFC/IFS combos exist for all five.) No rest for the wicked collector.

TRIVIA: William Randolph Hearst created the International Feature Service in 1912 as a vehicle for syndicating popular comic strips. It exists today as the King Features Syndicate, which licenses a vast array of well-known characters, including Felix the Cat and The Phantom. 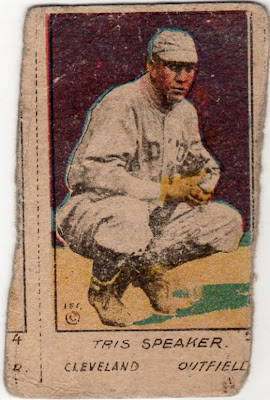 UPDATE #2: Another Speaker with parallel mis-cuts, but nowhere near straight. What kind of machine would create these angled edges? 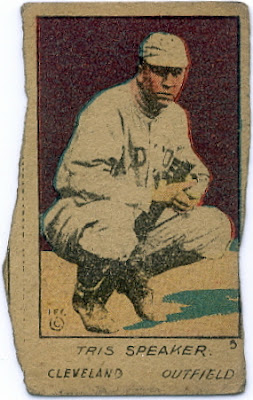 UPDATE #3: This Speaker shares the UNIVERSAL header seen above, so likely came from the strip's leftmost edge.

Value: I bought two of the Speakers pictured on this page for under $30 each. It's an affordable set for finding Hall of Famers during their careers.

Fakes / reprints: Haven't seen any personally, but they're so cheap to reproduce that fakes of Ruth and Cobb are likely.

I'm a huge fan of strip cards and I think they're finally starting to get the respect they deserve.

I'd like to see more people get into them, too. If nothing else, they're still affordable ways to start a pre-war collection.

I know I'm a little late to the game here, but I noticed that Speaker is looking in different directions in Update #1 vs. Update #2. The slightest tilt of the head makes the pose slightly different...easy to miss.

Now that you point out the head tilt, sure looks that way, doesn't it? Perhaps there's a variation in the color printing that would cause the apparent change, but it would be interesting to have a different photo end up in what's otherwise the same set.