First base seems an ideal spot for big-bat fan-favorites. Today’s guest shared the goal of most men with biceps like F-16s: swing hard. Do it early. Do it often. Over a 17-year career--mostly as an Oriole--Boog hit 339 homers with a career 134 OPS+. This card pictures him a year after winning the 1970 AL MVP; he also finished in the top 3 twice. 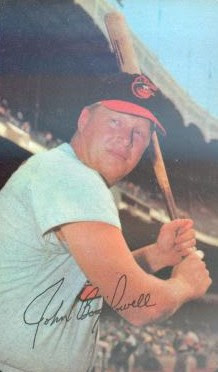 For the third year in a row, Topps distributed a "Supers" test issue in limited numbers across the country. Initially conceived as a regular-sized, high-quality set in 1969 (set profile), they grew in size for 1970 (set profile), and made their swan song in 1971 (gallery and checklist).

All Supers feature full-bleed photos and decent composition, but 1971's set feels lower budget than previous years. There’s not much gloss, so fronts can look dusty. Card backs reuse the normal set’s inset photo and stat grid, which seems unnecessary. While it features the thickest card stock I’ve seen in a Topps issue, edges split and peel fairly easily when handled. At least the rounded corners mean no "dog ears." (I cropped them out of my front scan, as my card's mis-cut on an angle.)


Can't get enough of the birds? See Orioles Card O the Day for another 1971 Super profile, #18 Dave McNally.


Value: Despite a high percentage of HOF players, the market doesn’t value 1970 and 1971 Supers highly. You can find ungraded cards easily and likely build a set for under $100. A trading partner sent today’s card gratis a few years back and eBay lists them for less than $5. (As a high-numbered short-print, Boog’s “normal” 1971 #700 card costs significantly more than that.)