In 1925, today's guest appeared in a single game for the Boston Red Sox. Bob (aka Bobby) made 3 catches in left field, rapped a two-run single, and walked once in 6 trips to the plate. As a career .300+ hitter and competent outfielder, you'd expect more work. Unfortunately, Beantown sank quickly into last place and older players--Veach was 37--became expendable. 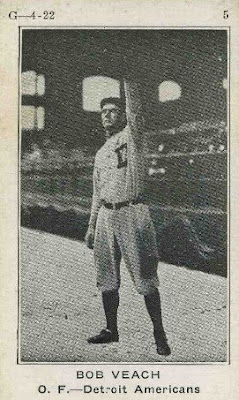 In May, the Sox shipped Bobby to another troubled team in search of a supporting cast, the Yankees. While Bronx's Bombers played well at home (42-36), a lineup of sluggers Ruth, Gehrig, and Bob Meusel couldn't save their road record (27-49). Veach batted well off the bench, even pinch-hitting for the Babe on August 9th, but New York cut him soon after. A final fortnight with the pennant-winning Senators in September closed his career at 2063 hits and 127 OPS+.

1922's W501 set includes 120 players with hazy black-and-white photos and white borders. Being strip cards, they often feature ragged edges and other wear. The design closely resembles caramel cards like the E121s and E135s, with rarity somewhere between the two. Low-grade commons cost $10 to $20, depending on the trimming and picture quality. I cropped rough edges from today's scan to make the picture less muddy. It's a solid PR-FR and cost $22 from eBay last year.
Posted by Matthew Glidden