Bob Kuzava pitched professionally for 20 years, about two decades more than most of us. Cleveland signed him in 1941, but three years in a US Army uniform delayed his appearance in the major league version. He finally pitched regularly for the White Sox in 1949, going 10-6 and earning this first card, 1950 Bowman #5. As you can see from the image, someone did a number on this guy, rendering him The Man Without Eyes. I picture a back pocket trip through the clothes washer or many, many games of flipping. 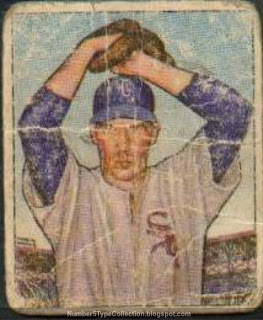 Collecting maxim #23: “When you see a card with a messed up front, don't count on a pristine back.” As seen in the back scan, a previous owner tracked Bob's progress through the majors with his ink pen, updating the White Sox name on the card back to “Yankees.” He pitched there from mid-1951 to late 1954, netting three World Series titles, including game 7 appearances in both 1951 and 1952. Unfortunately, New York saw his last effective years as an MLB spot-starter and long reliever. Bob mopped up with the Orioles, Phillies, Pirates, and Cardinals, leaving the bigs for good at age 34 in 1957. 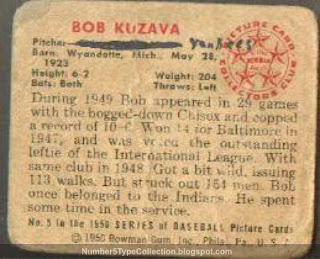 As of May 2009, Kuzava's still with us, and re-appeared as a signatory for the 2004 Bowman Heritage set, which replicates his 1955 color TV card. Many old school players rely on card and appearance-related revenue to bring home the bacon and I doubt Bob's an exception. When you meet older players at shows, make sure to give them your best and consider how much work it is to spend your golden years traveling between convention centers. If you see today's guest, ask about his disposal of the mighty Brooklyn lineup in 1952. As Don Larsen said when asked if he got tired of talking about his World Series perfect game: “Of course not! Why would I?”
Posted by Matthew Glidden