I love to write up the Red Man Tobacco cards. They're real art pieces, each player captured on what look like hand-colored versions of black-and-white photos. 1953 Topps used a similar technique, but their smaller size cropped out many details. Second-tier stantions loom behind today's guest, adding perspective and Golden Age flavor to an already memorable image. 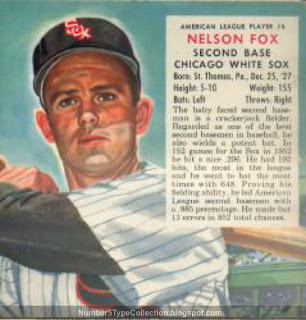 Nellie served with distinction for 14 years as the Chicago White Sox second sacker and on-base machine. The lifetime .288 average somewhat obscures his base running skills and great bat control. Fox ranks as one of the hardest men to send down swinging ever, leading the majors in plate appearances per strike out 11 times between 1951 and 1964. (Baseball Cube's list of league leaders includes another distinguished #5 man, Joe Sewell.) Yankee ace Whitey Ford supplied the perfect quote on Fox's Wikipedia page.

"Nellie was the toughest out for me. In 12 years I struck him out once, and I think the umpire blew the call."

The White Sox reached the 1959 World Series on his MVP performance and Nellie hung a .375 average (and .964 OPS) on LA pitching. His side actually outscored the Dodgers during the 6-game series, but dropped 3 crucial games by a total of 4 runs. That loss would be their only appearance until 2005's memorable sweep of the Houston Astros.

One fellow collector likes these tobacco sets so much, he created a virtual shrine to them at My World of Red Man. The site includes plenty of nice card scans and checklists for all four sets, 1952 to 1955. Any vintage collector would love to have a single well-presented HOFer, let alone two pages of luminaries. My eyes just about popped at the prices on the Market Report page, which focuses on PSA and SGC graded versions. For the record, Mr. Fox (without the bottom-edge tab) ran me about $10 on eBay back in 2004.
Posted by Matthew Glidden

Those were some nice looking cards!

Strangely that background looks like Boston, but they must have used generic ball park backgrounds maybe?,... even though Nellie has the Sox home uni on.

These are great looking cards and why all these years I have never picked any up is beyond me!?

Those are some of my favorite vintage cards! That Nellie Fox is beautiful.

Hmm, your vote's for Boston? Comiskey seemed logical, but I guess it's easy to look for something you want to be there.

My favorite card background "trick" is in the 1955 Topps Double Headers. If you get the whole set, you can line them up horizontally to show a single panorama of one particular stadium. It'd be neat if Red Man did the same thing, but I doubt that'll be the case.