As mentioned in the 1980 S.F.P.D. Giants #5 post about Mariner manager emeritus Jim Lefebvre, local police departments started printing baseball sets in the late 70s as a way to connect positively with fans (and mostly likely kids). Typical police issues show a posed shot, position, handedness, and other basic player info. Backs have public service tips, warning kids not to take candy from strangers, play with matches, or root for the Cubs (South Siders only). 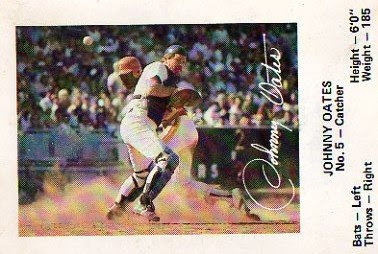 The pictured card shakes up "typical" police issues with a heady action shot, as a Houston Astro (Cesar Cedeno?) arrives at home plate in a cloud of dust. Somewhat unflattering to Mr. Oates, the ball clearly got away and probably bounced to the backup. (If I had the following of Rich Lederer's Foto Friday, the Internets would no doubt ID the players, game, and score by 5pm Eastern Daylight Time.)

Though a lefty batsman, Oates fielded with the more backstop-appropriate right hand. He fashioned a decade-long career with six teams by being, it seems, quiet and easy to work with. In Johnny's own words, "I still don't know how I got to the big leagues, because I wasn't that good...I kept my mouth shut. I couldn't throw. I couldn't throw a lick." Catchers hit even less in the 70s than they do now, so a .250 slap hitter shouldn't be seen as an aberration. With apologies to today's guest, there were many more of his caliber than equals of Thurman Munson, Darrell Porter, and Ted Simmons.

Johnny Oates won AL's Manager of the Year award in 1996 after leading the Texas Rangers to their first playoff appearance. He rode a lineup of sluggers to division titles in 1998 and 1999, but resigned in 2001 after poorer finishes due in part to management choices, such as signing Alex Rodriguez for 50 million Rocky Colavitos. The franchise retired his #26 in 2005.
Posted by Matthew Glidden