Today's card shows a Hall-of-Famer taking a nice, artistic cut with good follow-through. As a southpaw, Mr. Terry gets an extra step toward first base and probably used that edge to beat out a few of his record-setting 254 hits in 1930. Bill holds the all-time lefty record with a .341 average, but don't discount his power—the 2193 hits included almost 400 doubles and more than 150 homers.

(My own left-handed bat probably yielded an extra hit or two at the Little League level. It also helped that most 10 year-olds struggle to throw from third to first without a cutoff man.) 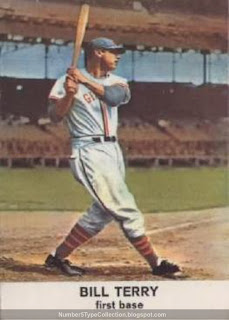 Although Bill's swinging at an imaginary ball in front of empty stands, the colored retouching makes the charade seem pastoral, like Kevin Costner playing catch with Joe Jackson in a corn field. “Build it...and Bill Terry will smoke line drives off the wall.”

This Golden Press set, their only issue, came in a 33-card album and featured exclusively retired HOFers. Big names include Ruth, Gehrig, DiMaggio, and Cobb, though students of the game should recognize the whole checklist. Cards from the front and back pages show more wear and command slightly higher prices, but it's relatively easy to build the set or find individual players. A friend gave me this #5 after finding it in a $1 bin in 2004. 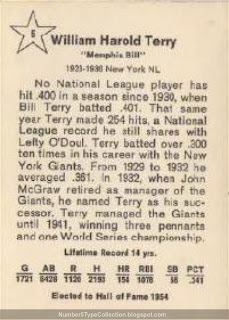 
Don Mattingly HOF supporters often mention today's guest as a comparison case. They both played well, but overall, it's a tough case to make. Their hitting stats match up well enough, but Terry also won multiple pennants (and a title) in NYC during his run as player-manager. You can't blame poor Yankee performance in the 80s on Don, but Bill gets an extra measure of respect for simultaneously handling strategic duties and logging big numbers at the plate.