In the early 20th century, many Americans stereotyped movies as low-class entertainment, rife with sex and violence. (Perhaps that's changed and perhaps not.) Evolving camera technology and filming techniques allowed Hollywood to move further from small stage settings and put the people and situations right in your face. 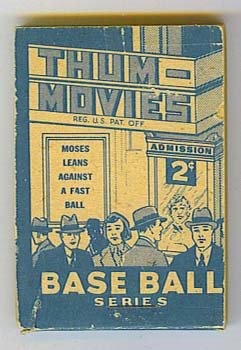 This fast-paced change in entertainment style garnered negative attention from conservative groups, notably the Legion of Decency. Many large cities, including baseball towns Boston, New York, and Chicago, proved receptive to its influence, paving the road for industry change. (See the 1910 Tip-Top Pirates #5 for a similar story with the Temperance folks.)

The LoD's coordinated social and political pressure led movie studios to make concessions on script and film content, primarily via adoption of the Hays Code. Prior to its 1934 enforcement, studios tackled a wide variety of issues, from race relations to the ambiguity of crime and justice. Dozens of “classic” genres, stars, and directors established themselves prior to the Great Depression, but soon felt the pinch of behind-the-scenes censors who reviewed all American-made scripts and films. Out went racy scenes, language, and sympathetic bad guys. In came screwball comedies and the G-Men. Movies didn't stop being good, but they had to tap dance around major issues with ever-increasing subtlety.

Content enforcement lasted for some time, enough that studios completely remade several existing films in order to work around problems with their pre-Code version. Filmgoers know Dashiell Hammett's The Maltese Falcon as the classic 1941 film starring Humphrey Bogart. The little-seen 1931 version practically disappeared under the code's influence and picked up an alternate name (Dangerous Female) to avoid later confusion between the two. See Wikipedia's list of pre-Code stars to imagine actors like James Cagney and Marlene Dietrich without their seminal (and intense) early roles. 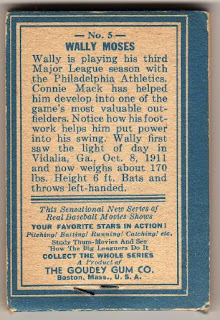 As movies entered a decade of behind-the-scenes turmoil, baseball cards bloomed. Goudey even mixed the two with this “card” set, a series of marquee-style flip books. Zip through one to see a "live" player making a quick play, pitch, or batting move. Thum Movies cost 2 cents and included player bios and some commentary on the backside. The writing's pretty close to what you get from their standard card sets, but I liked the unintentionally humorous subscript of "Your Favorite Stars in Action! Pitching! Batting! Running! Catching! etc." (I assume scratching and spitting fall into the "etc." category.)

See the Old Cardboard set profile for a bit more info and Baseball Almanac's version for the full player checklist. It'd be fairly hard to build a full set these days, given the rarity of individual books. This issue also contains one of Joe DiMaggio's earliest appearances, a full year prior to the 1938 Heads Up set. 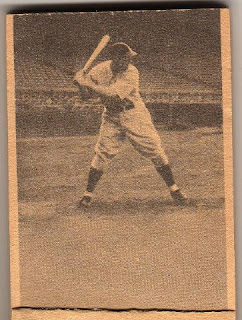 This scan shows the first page, with bat cocked and ready to swing. Each book zips through exactly 24 images, what folks now consider the standard speed for one second of movie projection. There's a problem with what you see here, though. If that's Wally at the plate, he's pulling a fast one on the movie man and swinging right-handed, even though he was a southpaw hitter and fielder. Personally, I think it's a different player altogether, something that happens from time-to-time on cards.

You can't deny the innovation of flip books for baseball collectors, but it's hard to compare with the company's 1938 set, a cool design that Upper Deck riffed on in 2007. These days, "moving pictures" come right from the cards themselves, courtesy of sets like Topps' 3D Live. Value: I bought this Moses book for $10 several years ago. Recent eBay actions are closing between $30-50 for Hall of Famers and probably half that for non-stars.

Fakes / reprints: It'd be a lot of work to fake a whole flip book, but beware of buyers selling single superstar pages, as copying them would be trivial. (I've seen separately graded individual pages of players like Joe DiMaggio, a dubious prospect at best.)
Posted by Matthew Glidden