Today's card serves up a treat, four players for the price of one, and two Hall-of-Famers to boot. All of them made at least 36 starts and logged 280+ innings. Pitchers at the top of leader boards almost always rely on above-average teams, though the 1972 version of Steve Carlton managed to win 27 times for the 54-97 Phillies, an astounding 50% of all team wins. (Let's agree that doesn't happen very often.) 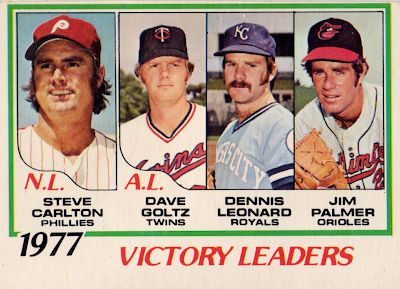 Card front
The Yankees took home rings in 1977, but didn't play the only good baseball that year. Putting each "leader" in context illustrates better who did what for whom.


Many O-Pee-Chee sets copy their Topps contemporaries card-for-card, adding only French flourishes and occasional "NOW WITH" notes for players on new teams. 1978 OPC mixed things up a little by shortening the checklist to 242 cards and swapping the Record Breakers, typically the first several cards, with the League Leaders. That turned 1978 Topps #5 into a Pete Rose card (RB for most lifetime switch-hits), while Canuck collectors got today's barbershop quartet of Winners. Zut alors, I like the choice to show LLs first. 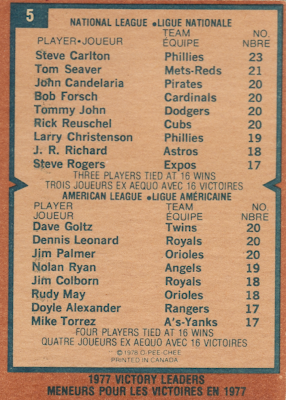 Card back
Value: OPC versions come in short supply compared to Topps, but values don't differ significantly. Leader cards, even those with HOFers like Carlton and Palmer, only cost a few dollars ungraded. Sellers that highlight them as "signficantly rarer" and "brimming with investment potential" should, IMHO, switch to decaf.

A huge fan of OPC during the 70's.
I just now noticed that after all those years the Jim Palmer photo looks like an early 70's shot. The "Baltimore" road jerseys stopped being used about 1972 or 1973.

Never the less it's still a great photo and great card itself!

Good catch on the uniform year. Jim definitely looks younger on the LL compared to his Topps card from the same year and it's a completely different glove.