You're a three-sport star coming out of high school and get drafted (White Sox, 1974), but stick with more education and go to Amherst. The pros call again after junior year (Red Sox, 1977), but you want the degree and stay in school. Then both the baseball Dodgers and football Giants draft you after graduation, but should you stay in MORE school? At long last, Bill choose stirrup pants and turned pro for LA. And after all that waiting, the denouement: despite five years of fair success at AA & AAA, he never got an MLB call-up (minor league career stats). 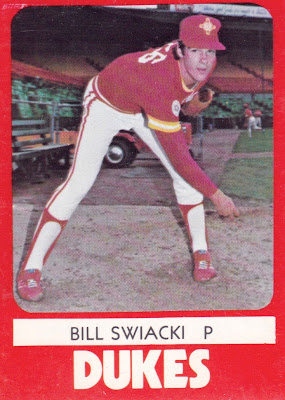 Crotch photobomb by the groundskeeping cart. That doesn't happen often. 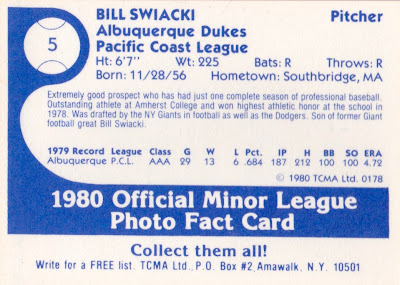 TCMA's back text hinted the football Giants might've drafted Bill, Jr. because he was son of former NY star Bill, Sr. The 21st century NFL probably takes itself too seriously for this kind of move, but it's nice to see the 1978 version make that nostalgic nod.

Value: This #5 cost $2 at MinorLeagueSingles.com. Given the number of future major leaguers, dealers charge $20-40 for the team set.